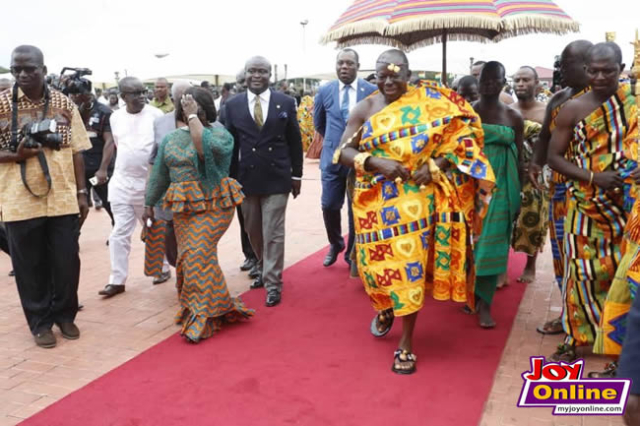 The Asantehene Otumfuo Osei Tutu has scored a brace for himself as far as historic visits are concerned. Some 24 hours after a rare visit to Okyenhene, the Asante king is at the seat of government, Jubilee House, for his first visit since Nana Akufo-Addo became president.

The President has been there three times since he was elected. The king, however, with no election to win has not been in a hurry to hobnob with the president in his official home.

The reflexively wide smiles of government ministers and state officials told its own story of their personal yet unvoiced surprise to see the king and statesman at the Jubilee House.

Smiling the widest was the Education minister, Matthew Opoku Prempeh who would probably be carrying the Asantehene in his palanquin had he not sought a life in politics.

His clan is traditionally responsible for carrying the royal palanquin, the Asante's kingdom's best effort at inventing a form of transportation for their king.

The ministers lined up like voters to pay their respects to the revered king, some of them scoring their own brace as they shook the king twice in two days.

Camped at the forecourt of the sprawling Chinese-engineered building that houses Ghana's sovereignty, the Asante kingdom's most regarded officials were arranged by their king.

The red carpet from where the Asantehene sat run as long as the length of a football pitch and squared into the Jubilee House to call out the President to meet the man who controls his party's stronghold – the Ashanti region.

The President has been to the Ashanti region thrice since he was sworn in, January 2017. First in August 2017, next in June 2018 and as recent as August 2018. All of these stops were during a nationwide tour.

And in all these stops, the Manhyia Palace where the king stays was the first stop by convention. The palace, a traditionally richer but physically less glamourous home than the president's official abode, is the place where the soul of a once feard kingdom stays.