Photos: KOD gives thanks to God after surviving horrific accident 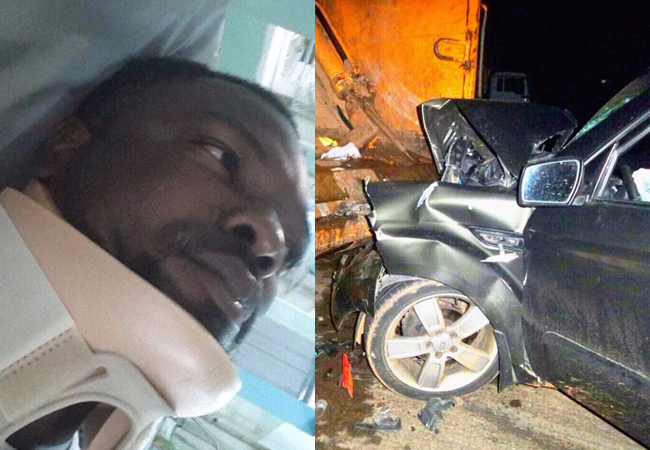 The accident occurred around 11:30pm near the Nestle Ghana offices on Tetteh Quarshie – Mallam Highway (N1) when the broadcaster was returning home, at Achimota, from a family party.

Speaking in an interview with Myjoyonline.com from the 37 Military Hospital, where he is currently on admission and receiving treatment, KOD said he is grateful to God for sparing his life in an accident that could have been fatal.

“God is KING,” he said considering the fact that the frontal part of his Kia saloon car was badly mangled.

The broadcaster narrated that the accident “happened on the night of 31st [March]. I was going home alone from a family birthday party. Was on the N1, drove into an abandoned truck in the middle of the road with no triangle or sign.”

According to him, “I thought the truck was in motion. When I realised it was too late and drove into it.”

He revealed that he did not suffer any major injuries except that he is “bruised on my left hand but the hospital is still keeping me here.”

KOD, who is also a fashion designer, disclosed to Myjoyonline.com that he will be discharged Friday.

See some of the photographs of the accident below: