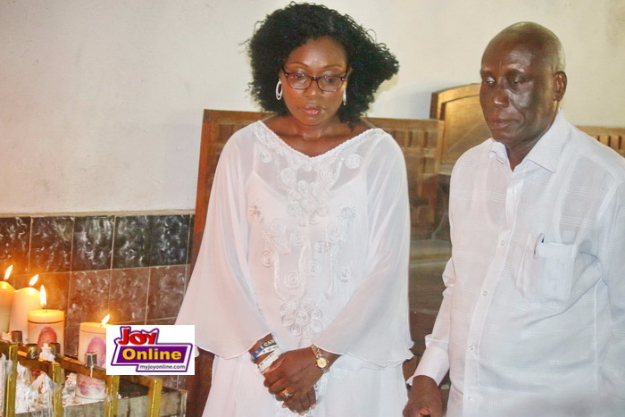 The family of the late ace broadcaster Komla Dumor in partnership with the Komla Dumor Foundation on Tuesday held a classical music concert to solemnly commemorate the 3rd anniversary of the former Joy FM and BBC employee.

The event at the Holy Spirit Cathedral in Accra was attended by friends and family of the late broadcaster with the former Deputy Minister of Tourism, Creative Arts, and Culture, Abla Dzifa Gomashie in attendance.

Two special candle lights rituals were performed by Prof. Ernest Dumor, father; and Mawuena Trebarh a sister of Komla Dumor to remember Komla and his mother, Mrs Dumor of the blessed memory.

The program began with a song by the Holy Spirit Cathedral senior choir led by Kobina Yebuah followed by a classic organ music by Peter Twum-Baah.  Soloists of the church, Paula Jiagge and Mary Kumadey spiced the evening with some touching recitals which left the father of the ace broadcaster in pensive mood for most part of the program. Prof. Dumor wore his white traditional dress and looked quite calm.

Preaching the sermon, the Very Rev. Father Samuel Filton-Mensah paid a glowing tribute to the late iconic BBC reporter. He said the late Komla Dumor was brought up by God fearing parents and therefore never departed from the virtues which he was raised with.

He noted that Komla Dumor created a niche for hismelf as a journalist of great repute.

Father Filton added that Komla had an enviable endowment and could easily have been carried away but he was still submissive, nonetheless.

He noted that Komla led an exemplary life and left a legacy for many to follow.