Photos: Staff of PBC demonstrate, call for resignation of CEO 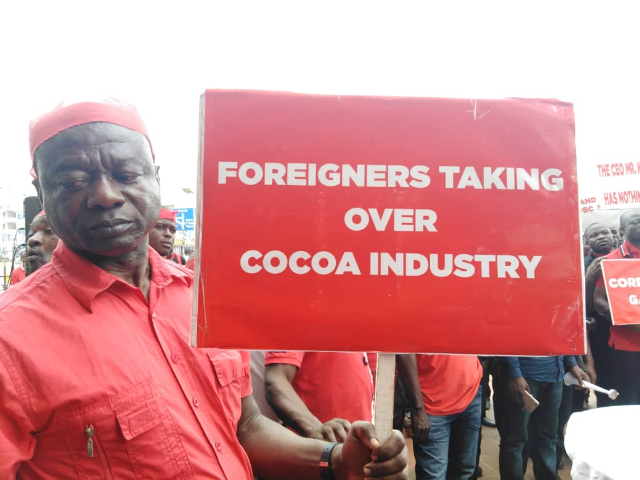 The staff of Produce Buying Company Ltd on Tuesday demonstrated at the head office of the company.

They are calling for the resignation of their CEO, Kofi Owusu Boateng, Joy News’ Nancy Emefa Dzradosi has reported Tuesday morning.

According to them, Mr. Owusu Boateng is inexperienced and lacks vision.

These have led to a downward spiral of the company’s fortunes as it can no longer purchase 15% of Ghanaian cocoa, alledged.

Produce Buying Company Limited is incorporated as a Public Limited Liability Company under the Company’s Code of 1963 (Act 175).
In May 2000, the Company was listed on the Ghana Stock Exchange.

PBC Limited originally exists as a Licensed Buying Company (LBC) which partakes in the Internal Marketing of Cocoa as its core business among other auxiliary businesses to complement its revenue stream. The Company, however, has remained the highest cocoa purchaser for COCOBOD among the other LBCs with a market share of about 31%.

The CEO of PBC has been responding to the allegations leveled against him.

Kofi Owusu blamed the state of affairs on the previous management under the erstwhile NDC government.

According to him, they left a debt of 640 million Ghana Cedis.

And “until there are money and a letter of comfort, the situation will not change,” he pointed out Nancy Amefa Dzradosi.

The Demonstrators who were draped in red, were calmed by words of assurance from the General Secretary of the ICU.

Solomon Kotei told the aggrieved workers that the government will soon come to their aid.

Government is committed to bailing out the company, ICU General Secretary revealed contents of deliberation the ICU had with the president when its leadership met him on Friday.

Mr. Kotei took the opportunity to admonish the workers against bad corporate practices which have consistently caused volumes of shortages over the years.