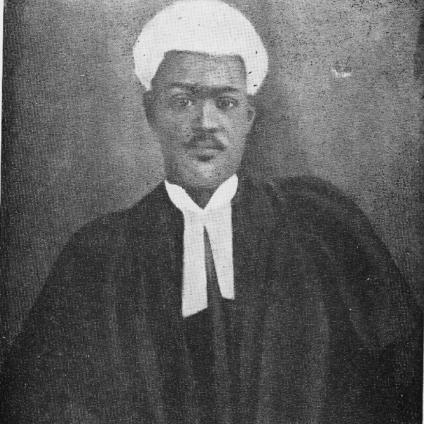 In 1853, the Kingdom of Great Britain established a court in the Gold Coast territory – modern day Ghana.

A few Africans developed a keen interest in the legal profession. By 1864, the Colonial Office of Great Britain decided to license a handful of African legal practitioners.

These pioneer legal practitioners occupied an enviable role in society that came with prestige and power.

Meanwhile, the monarchs were envious of the nouveau white-collar elite that intrusively acted as a check and balance on their authority.

The pioneer legal practitioners were an intermediary between the formal court proceedings and their illiterate suitors.

It was a new phenomenon, much to the frustration of monarchs, when commoners – the subjects – sought legal representation to contest their decisions or conduct.

This undermined the unique ancient customs and traditions that empowered royals to govern.

King Aggrey of Cape Coast was particularly quick in his attempt to reverse this. He instructed Joseph Martin to criticize ‘the employment of attorneys when the natives had better speak for themselves’.

The counter-measures taken by some royals exerted considerable pressure on the Colonial Office.

The administrator of the Colonial Office, Colonel Conrad, was also suspicious about the sudden prominence of indigenous lawyers.

In 1865, the licenses of African legal practitioners were discontinued; they were no longer permitted to appear in court uniformed in wigs and gowns.

African legal practitioners were once more licensed in 1867. The demand for legal representation soared. Commoners who exploited and profited from international trade sought regular professional advice. But the turbulence did not stop.

Foreign judges grew increasingly hostile towards African lawyers. Chief Magistrate, D. Chalmers, denigrated and vilified indigenous attorneys that appeared before him. He felt they weren’t well-educated and frowned upon the exorbitant fees paid by suitors for their scarce services.

D. Chalmers enforced yet another ban on African legal practitioners, in 1870, and in 1873 argued for their exclusion from courts altogether. The Secretary of State for the Colonies, Lord Carnarvon, opposed Chalmers’ position and proposed new regulations to raise the standards for professional accreditation.

Lord Carnarvon suggested that prospective African lawyers should practice on one condition: they were required to pass an examination that proved in-depth knowledge of court procedure, and the broad general principles of civil and criminal law.

It took about a decade for the new academic regulations to produce a supposedly better trained class of lawyers.

The first qualified African lawyer to practice in the Gold Coast was J. Renner Maxwell, in 1883.

In 1884, P. Awoonor Renner became the second to qualify; he notably turned down a senior government appointment since he earned a £1,000 a year from his private practice. The first lawyer entirely of African descent, John Mensah Sarbah, qualified in 1887.

The prestige of the practice was not only enhanced by material affluence, but also the rare privilege that allowed commoners to cross-examine royals.

The emergence of qualified legal practitioners paved the path for political movements, protests and petitions against the Kingdom of Great Britain and the Colonial Office.

The author, Vincent Djokoto, is a Business Executive and Columnist.
Twitter/Instagram – @VLKDjokoto