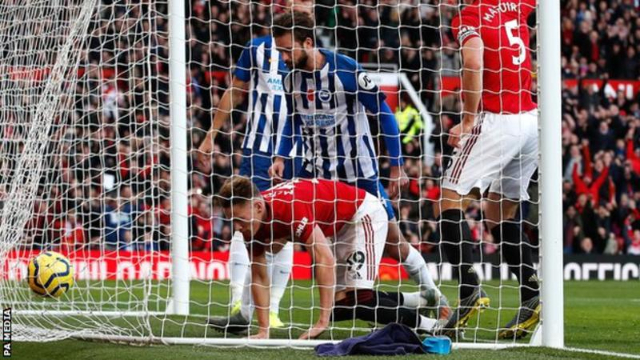 Manchester United moved up to their highest Premier League position in two months as they beat Brighton to go seventh.

Andreas Pereira’s first goal of the season set them on their way to a fifth win in six games.

After a long VAR check, Davy Propper’s own goal doubled United’s advantage before half-time, with Marcus Rashford responding almost immediately after Lewis Dunk had pulled a goal back for Brighton.

Rashford should have had another but inexplicably fired Daniel James’ cross wide of an open goal.

Brighton keeper Mat Ryan saved from James and Brazilian midfielder Fred, who was outstanding, before denying what would have been a memorable solo effort from Anthony Martial in the latter stages.

The result was United’s biggest home Premier League triumph since August and, after their 3-0 win over Partizan Belgrade in the Europa League on Thursday, was also the first time they had scored six in two games since March.

The victory came at a cost, though, as midfielder Scott McTominay had to be carried down the tunnel on a stretcher after falling awkwardly.