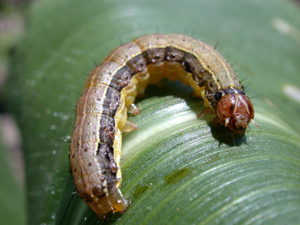 The Plant Protection and Regulatory Services Directorate (PPRSD) in the Ashanti Region says it is ready to tackle renewed cases of Fall Armyworm and other pests.

“We are well-staffed and ready to fight Fall Armyworm and other pests and diseases this season,” the Ashanti Regional Director of PPRSD, Godson Tettey said.

The department is also training newly-recruited officers for districts and municipal assemblies to deal with pests and diseases.

Godson Tettey said efforts to fight Fall Armyworm in previous years was challenging due to inadequate staff – but not anymore.

Fall Armyworm invasion, for instance, came as a surprise to many Ghanaian farmers because they were uninformed about the pest.

The outbreak became a national discussion and many people blamed the government for poor response.

The Ministry for Food and Agriculture had to declare a state of emergency to deal with the situation.

When the pest became widespread in parts of Africa, the Food and Agriculture Organisation (FAO) of the United Nations had to organise a South-South Meeting in July 2017 in Accra.

The three-day meeting by experts was to deliberate on the outbreak of the Fall Armyworm infestation rapidly spreading across Africa.

It was also aimed at exchanging practical experiences and best practices on how best to manage the pest.

“That is exactly the objective of this Expert meeting: “Learning from the experience of the Americas” where the pest has long been known and farmers have adjusted to manage it,” FAO Assistant Director-General and Regional Representative for Africa, Bukar Tijani, said.

One of the key measures agreed at the meeting was to consider the biological control method.

The PPRSD later identified five natural enemies to biologically control the infestation of the Fall Armyworm in the country.

A sixth natural enemy called Entomopathogens was yet to be fully identified by the Directorate at the time.

Director of PPRSD, Dr Felicia Ansah-Amprofi said a team of scientists was analysis and rearing the natural enemies in the laboratory before they could be released into farms.

The directorate has, however, outlined measures to manage the pest. One of them was to adequately staff the regional, district and municipal offices across the country.

Ministry of Food and Agriculture was, therefore, compelled to recruit more staff to fight against Fall Armyworm among other pests and diseases.

Ashanti Region, for instance, has received its share of the newly-recruits, 55 of whom have been trained and dispatched to their various operational areas.

Godson Tettey said adequate preparation is in place to ward off any threat of Fall Armyworm.

“Government has done its parts in terms of logistics and now we advise farmers to manage the pest at a very early stage,” Mr Tettey said.

Deputy Regional Agricultural Officer, Michael Kumah, said successes pulled off this year are clear indications that PPRSD is on top of issues.

“The situation is no alarming,” Kumah indicates.

Some of the new recruits say they are ready for the task ahead and would deliver as expected of them.

They pledge to monitor report and get farmers on the alert about the invasive pest.

The Fall Armyworm is a devastating pest which has come to stay, and only better management practices can keep it way.