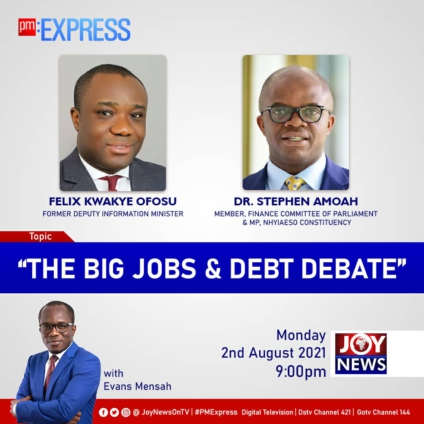 The government has disclosed that its expenditure exceeded the total revenue generated from January to June this year, by GH¢22.3bn.

According to Finance Minister Ken Ofori-Atta, although GH¢28.3 billion was raised, an amount of GH¢50.6 billion was spent. He, however, while presenting the 2021 Mid-Year review of the Budget Statement and Economic Policy revealed that the deficit of GH¢22.3bn was financed from both foreign and domestic sources.

Tonight on PM Express, host, Evans Mensah and his panellists, former Deputy Information Minister, Felix Kwakye Ofosu and member of the Finance Committee in Parliament, Dr Stephen Amoah discussed the nitty-gritty of Ghana’s fiscal deficit and what measures government can undertake to resolve the challenge.

Also, during the reading of the 2021 Mid-Year review, Mr Ofori-Atta revealed that government is ready with a comprehensive programme to create a million job opportunities for the youth in the next two and a half years.

The issue of employment for the youth in the country and how government would ensure that without worsening the public debt stock was also discussed.