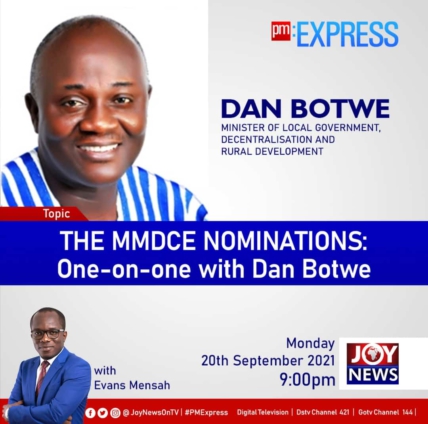 On September 19, government through the Minister of Local Government, Decentralisation and Rural Development, Dan Botwe released the list of nominees for the Metropolitan, Municipal, and District Chief Executives (MMDCEs) positions.

Mr Dan Botwe during a meeting with the press, affirmed this, “Regional Directors of the Electoral Commission will on Monday get in touch with the Presiding Members of the various Assemblies and start the process of confirming the President’s nominees,” he said.

Tonight on JoyNews, PM Express took a critical look at the list presented by government.

In a one-on-one interview, host, Evans Mensah interacted with Mr Dan Botwe to address issues such as few female representations, raised by some members of the general public.