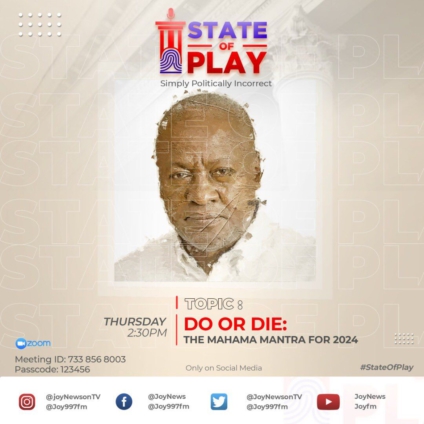 The 2020 flagbearer for the opposition National Democratic Congress (NDC), John Mahama, has been in the news since Tuesday after he declared that the 2024 elections will be a do-or-die affair.

Nonetheless, the former President has maintained his stance and has refused to bow to the governing New Patriotic Party (NPP) who he says have misconstrued his statement.

Today’s edition of State of Play, Evans Mensah, Winston Amoah and Raymond Acquah will take on the issue in the usual no-holds-barred manner.

The show promises to be enlightening, entertaining and most of all engaging.

It is being streamed on all of the Joy Cluster’s social media platforms.