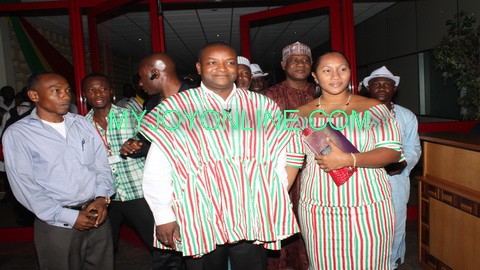 The presidential candidate of the Peoples National Convention has laid bare the policy alternative of the party if voted into power.

Hassan Ayariga was the next candidate after the CPP’s Dr Abu Sakara to appear in the Institute of Economic Affairs organised Presidential Encounter.

He is being introduced by his party’s General Secretary Bernard Mornah.

Mornah after the ‘extravagant’ introduction calls for a standing ovation and the popular ‘Arise Ghana Youth’ song to welcome the youngest presidential candidate for the 2012 elections Hassan Ayariga.

Ayariga mounts the stage in his resplendent Batakari in PNC colours and admits the platform is his biggest in his political career.

He said Rehabilitation, Redirection, youth empowerment and economic growth throughout the country will be the policy direction of the new PNC.

He condemned politics of insults and commended peace ambassadors in their attempts to create awareness for peace in the elections.

Hassan Ayariga will bring to government leadership of hardwork and truth, he assured, and reorient the political mindset of the people, he added.

He said discrimmination in the awards of contract will be over. “I will be a father for all”, he promised.

“We should practice politics of law and respect for one another” and not politics of mistrust.

He promised a long term national development plan for the growth of the country. The policy will be non-partisan and will be done professionally.

The School Curriculum from the basic to the tertiary level will be relooked at to respond to the needs of students.

Will build and create world class educational institutions and create opportunities for students to become for industrious and creative.

The PNC will expand the mandate of the Student loan to cover private students and review the ICT policy in schools.

The PNC will initiate Special retirement packages for the aged to retire honourably.

Hassan Ayariga will initiate policy alternatives to change the attitudes of Ghanaians towards work.

PNC will build many more hospitals, polyclinics and train more doctors and nurses across the country.

The PNC will take a second look at our ‘brain child’ the National Health Insurance Scheme to cater for the health needs of the people.

PNC will revisit the operation feed yourself programme implemented in the Acheampong era and find ways of improving it to become the major source of food baskets for the people of Ghana.

The party will also expand shea butter industries to create more jobs for the people especially the women in the North.

Town and Country planning Agency will be changed into an authority as part of measures to improve housing in the country.

After the first four years of a Hassan Ayariga government, Ghana will see growth and development in all its sectors.

The PNC leader is done with his presentation and receives thunderous applause from participants.