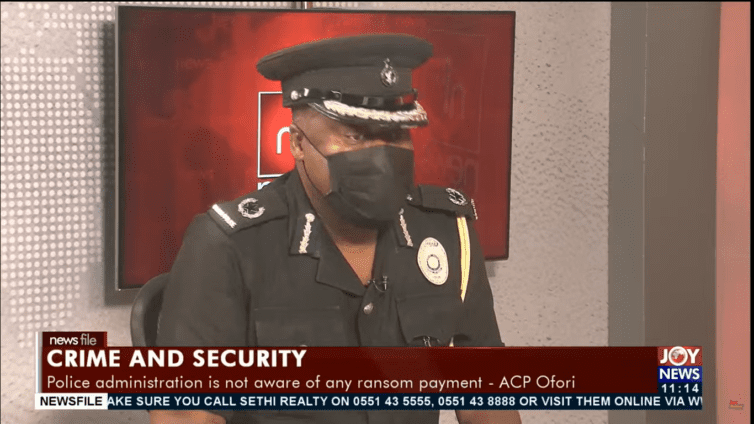 The Acting Director-General of the Ghana Police Service’s Public Affairs Directorate, ACP Kwesi Ofori, says they are not aware that the Western Regional Minister paid ¢3000 to kidnappers of a woman in Takoradi.

This comes after the aide of Kwabena Okyere Darko-Mensah told the media that his boss supported the police in handling the case by providing the amount to be used to pay the ransom that was requested by the alleged kidnappers.

But speaking on JoyNews’ Newsfile, ACP Kwesi Ofori explained that the Headquarters Management Board has not received any information regarding the ransom payment since it got involved in the case.

“We distance ourselves from that story. We are not part of it. The police administration is not aware of such payment,” he stressed on Saturday.

ACP Ofori further stated that “In a security operation, such sensitive things bordering on kidnapping and such purported criminal activities, information around it should be well controlled.”

The senior officer further told host Samson Lardy Anyenini that now that the information has been brought to his attention, an investigation will be carried out to ascertain whether it is factual or otherwise.

“The information has not come to the attention of the management board, you are telling me, and we will look at it. We will find out whether the regional police, divisional police, or the station took such an amount and what they used it for,” he said.

A week ago, a missing person flyer with a picture of one Josephine Panyin Mensah began circulating on social media. It stated that she was nine months pregnant and had gone missing since the 16th of September, 2021.

News later broke of her reappearance on the 21st of September 2021. She was, however, found without a pregnancy or a baby.

Further investigations by the Ghana Police Service revealed that Josephine was never pregnant and declared her a suspect in a self-kidnapping case.

This caused friction between the authorities and residents of Takoradi as they protested and invoked curses on the police.

On Friday, the Ghana Police Service has disclosed that the Takoradi-based woman who allegedly faked her pregnancy and kidnapping has confessed that she was not pregnant.

Meanwhile, ACP Ofori has disclosed that Josephine Panyin Mensah will be arraigned before court and prosecuted.

“Nothing will stop the police from going ahead to the court. Looking at the resources and the harm she has caused in terms of confusion between the family and state institutions and what happened on the media front [she will be prosecuted],” he said.