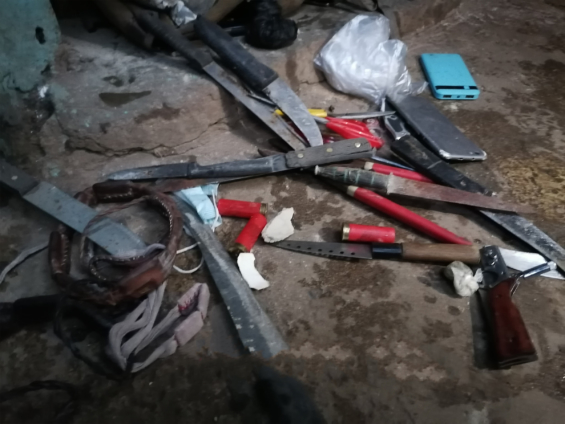 Others are; wrappers of dried leaves suspected to be Indian Hemp and tramadol tablets.

Police Spokesperson, ASP Godwin Ahianyo told JoyNews that the swoop is one in a series to rid the region of criminal dens and hideouts for miscreants terrorizing residents.

“The Command, in recent times, has received a couple of complaints from residents in and around Aboabo, Tinker Island and its environs to the effect, that there are some criminal elements within the vicinity who have been attacking residents.

And because of that, the regional police command decided that we will embark on an exercise in the form of a swoop to be able to get these criminals arrested.

A team of personnel from the Anti-Armed Robbery Unit and the Regional Headquarters Operation embarked on this swoop and we managed to arrest 15 persons,” he said.

“ We retrieved a number of exhibits. As we speak, we have 1 foreign pistol in our custody; we have 3 live cartridges, machetes, 15 pairs of scissors, a quantity of dried leaves suspected to be cannabis concealed in a brown envelope and a quantity of tramadol tablets. We also had a military jacket and assorted phones,” he added.

He revealed more of such swoops would be organized to relieve residents of the nefarious activities of criminal gangs.

“Previously, we used to embark on these swoops at various criminal dens. Sometimes, we go to Suame Kotoko, Colombia in Krofrom and other criminal dens. As we have embarked on this, we are going to continue and then extend our operations to these areas I have mentioned and others that I haven’t mentioned.”

The region has in recent times, recorded some violent crimes.

One person was killed at Aboabo during the  EId -ul- Adha celebrations as armed gangs brandish weapons.

The Police Command assures residents of adequate security as it flushes suspected criminals from the region.

“ We just want to assure the general public that the Police Command is poised to make the communities safer,” ASP Ahianyo said.

Meanwhile, suspects found culpable after being screened, would be prosecuted.