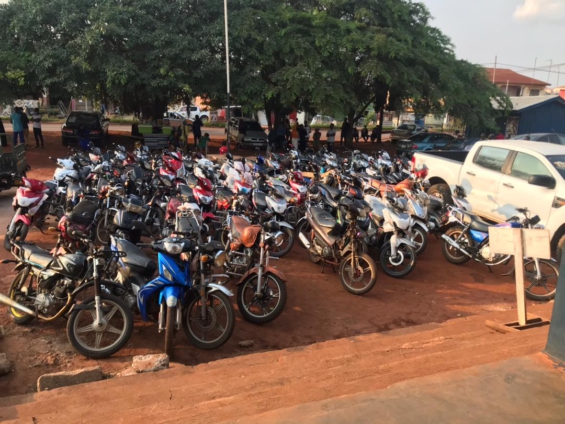 The Techiman District Police Command has impounded 89 motorbikes and 4 tricycles following an operation to clamp down on the use of motorbikes for criminal activities within the Municipality.

On Thursday, July 29, 2021, the bikes were impounded in an operation by personnel from the Techiman District Command.

According to the District Commander Deputy Superintendent of Police (DSP) Emmanuel Ofori, the operation is targeted at unregistered motorcycles used for criminal activities across the Municipality.

“There have been complaints of motorbikes been used to commit a crime such as robberies, snatching of mobile phones and others, so the District Command this morning embarked on an exercise to clamp down on this illegal activity carried out by these motor riders. So that is why we undertook this exercise,” he said

He noted, “The exercise led to the arrest and seizure of 89 motorbikes and 4 tricycles”.

Some of the motorbikes were impounded because they were unregistered with other offences include riding without helmets, use motorbikes without license or insurance.

DSP Emmanuel Ofori added that “currently we are liaising with the DVLA to ensure those who have the needed documents when they produce them we’ll release it to them because some of the bikes though they are registered, we suspect them to be fake”.

The police say persons who fail to produce documents of their arrested motorbikes would be processed for court for redress.

“We have already begun screening and profiling of these persons who have been arrested, and those who would be linked to any crime will be made to face the full rigours of the law.”

“I must say that this exercise would continue unabated to clamp down on illegal activities carried out with the use of motorbikes until there’s sanity in the District,” he added.