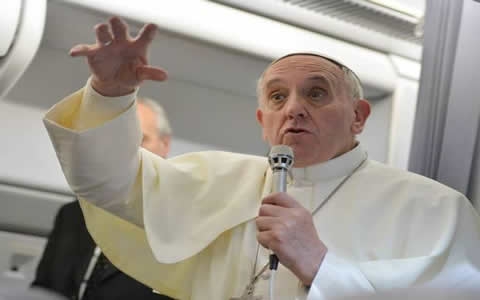 Pope Francis has warned that the commercialisation of sport may undermine its spiritual values.

The Pope told Olympic leaders that looking for profit and victory at all costs risked reducing athletes "to mere trading material".

"Sport is harmony, but if money and success prevail as the aim, this harmony crumbles," Pope Francis said.

Pope Francis, who was elected in March, has struck a different tone to his predecessor on a range of issues.

He said recently the Church was too focused on preaching aboutabortion, gay people and contraception.

And he made headlines when he said it was not up to him to pass judgement on the sexual orientation of clergy.

Pope Francis played basketball as a young man and is a keen supporter of his local San Lorenzo football club in Buenos Aires, says the BBC's David Willey in Rome.

The Pope had two days of meetings with leaders of the world of sport. He met Sepp Blatter, the head of the International Football Federation, Fifa, and International Olympic Committee President Thomas Bach.

He has also been talking about the spiritual values of team games with the rugby squads of Italy and Argentina – ahead of their encounter in Rome, our correspondent says.

"Rugby is like life because we are all heading for a goal. we need to run together and pass the ball from hand to hand until we get to it," Pope Francis told the rugby players.

Addressing the delegates of the European Olympic Committees at the Vatican on Saturday, the Pope said: "When sport is considered only in economic terms and consequently for victory at every cost, it risks reducing athletes to mere trading material from whom profits are extracted.''

Mr Bach presented the Pope with the Olympic Order in Gold, telling him: "You truly understand the joy in human spirit that sport can bring but just as much the deeper values that it can nurture."

Mr Blatter gave the Pope a special Latin edition of the Fifa magazine.