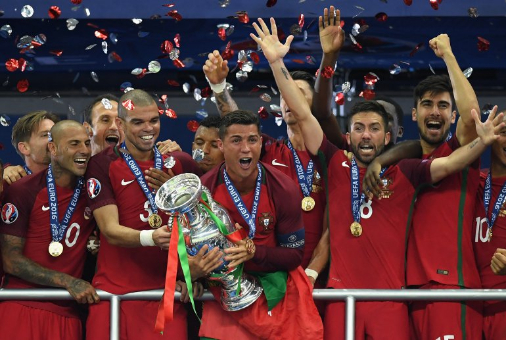 A goal of breathtaking genius by Eder in extra-time gifted Portugal their first European glory and left France desolate and heartbroken.

It was a goal that came from nothing, from an unlikely source but it was special. Eder from 25 yards shoved off a challenge from  Kochielny before striking low and hard to beat Lloris in post for the host.

The Selecao gave everything for Ronaldo who was carried off the pitch on a stretcher  in pain, in tears when he was cluttered into after 23 minutes.

And when he returned limping on a strapped knee, the Portuguese football god had turned into an assistant manager issuing instructions and motivating his charges from the touchline.

It was a story of great attitude, determination and commitment from a Portuguese side who many had given up on and never gave a chance.

But the players never gave up on themselves and when their star man was out injured they turned their weakness into strength, played a compact game and kept the host quiet for most part.

France wanted a repeat of the 1984 host and win spectacle and they looked destined for it.  Greizmann forced a superb finger-tip save from Rui Patricio with a stupendous header just before the quarter of an hour.

And when Payet sent Ronaldo off the pitch with his crunchy tackle, the French appeared to be on track with their game plan and  looked set to accomplish a vision. They were stronger, faster even though the Portuguese were more skillful.

In one moment of brilliance, Sissoko, dummied his marker in the 18 yard box before firing a thumping shot but Patricio parried the ball to safety.

The chances created in the first half were few and far in between. But the second half was a different story.

Coman came in for Payet in the second half, a shocking decision many fans thought, but the Bayern Munich player quickly got himself busy with an inch perfect cross to Griezmann whose header whisked agonizingly wide in the 65th minute.

The Athletico short man who is extraordinary in the air should have buried that and he knew it. It was by far the most glorious opportunity wasted, one he would rue later on.

In the 75th minute Giroud who had been kept quiet throughout fired at close range, but Patricio was alive to his duties.

Six minutes later, the Portuguese responded and it was stand-in skipper Nani who curled in a cross which nearly entered the post but for the agility of Lloris who parried away before grabbing the rebound which was taken overhead by Quaresma.

It was the closest the Portuguese came to scoring in the second half but they were amazingly disciplined in defence.

It the 82nd minute Sissoko again  fired a thumping shot from 30 yards, forcing a diving save from Patricio. The clock ticked. The host were desperate to score but the Portuguese were in no hurry and not in the mood to be pushed around. They defended. All of them.

In a last gasp miss, Gignac who came in for Giroud, teasingly outwitted Pepe, fired low to beat Patricio but the ball went off the post and passed across the face of goal. Griezmann was around but could not tap in as the ball was later cleared to safety.

It was another opportunity missed by the host, one that gave the guest more confidence to stay the cause in extra time. Portugal had chances of their own in extra-time but they missed them.

The game looked set for penalties. The Portuguese wanted it; the French hated it but were tired and did not have the strength to finish off in extra time.

And as they held on grudgingly towards penalty, the host had the worst nightmare. Eder scored in second half of extra time. It had to be something special to beat Lloris from that distance. And it was special.

The tall Portuguese striker who was always in the shadows of Ronaldo came to the limelight. His goal would perhaps be the most important, for several decades. One that will decorate the hitherto empty-Portuguese-trophy-shelf with one great international trophy and gift Ronaldo a trophy he had yearned for, hoped for, worked for, for several years. Now he can hold it, kiss it, lift it up and that is exactly what he did because, he like the 22 other Portuguese men and technical staff are European champions.