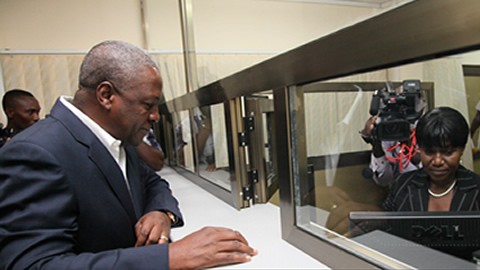 The Constitution Review Implementation Committee (CRIC) has submitted a draft bill for the amendment of entrenched provisions in the 1992 Constitution to the Attorney-General and Minister of Justice, the Chairman of the CRIC, Professor E.V.O. Dankwa, has said.

The submission of the draft bill paves the way for work to start on the processes towards the conduct of a referendum to decide whether or not Ghanaians are in favour of the amendments.

From the Attorney-General, the bill is expected to be submitted to the Cabinet for discussion, after which it will be referred to Parliament and later to the Council of State.

The bill will then be sent back to Parliament for it to give its approval for the conduct of the referendum.

President, others to pay tax

In an interview with the Daily Graphic in Accra, Prof Dankwa said some of the new provisions of the bill required that the President, the Vice-President and other Article 71 public office holders, including the Speaker of Parliament, the Chief Justice, justices of the Supreme Court, the Chairman and members of the Council of State, ministers of state, deputy ministers of state and Members of Parliament pay tax to the state.

The proposed provision in the draft bill calls for the abolition of the death penalty and asks for it to be substituted with a life imprisonment.

It again asks that the prerogative of mercy should not be extended to people who have committed high treason, treason, genocide, murder or narcotic offences, except in circumstances determined by a medical board.

The draft bill calls for the amendment of Article 78, which requires the President to appoint majority of ministers from among MPs.

Swearing in the President

The provision gives the Chief Justice the opportunity to designate a Superior Court judge to swear in a President-elect.

The draft bill calls for the amendment of the current provision in Article 57 which demands the swearing in of a President-elect in Parliament.

It proposes that the President-elect be sworn in public in exceptional circumstances.

Death of a President

A new provision is also that if the President-elect dies before being sworn in, the Vice-President-elect will be sworn in as President. He shall then nominate someone as vice-president, with the approval of Parliament, within 14 days.

And where the office of the vice-president becomes vacant as a result of death, resignation or removal,  the President shall, within 14 days, nominate someone to be the Vice-President, with the approval of Parliament.

However, this is not applicable if there are 30 days or less to an election.

The new provision stipulates that in the event the President-elect cannot subscribe to the oath of allegiance due to ill health, a medical board might decide whether the President is likely or unlikely to recover from his ailment.

On the other hand, if the board comes to a conclusion that the President is unlikely to recover from his ailment, the Vice-President-elect will be sworn in as President.  He will then nominate someone as vice-president, subject to the approval of Parliament, within 14 days.

The proposed provision requires two-thirds of MPs to validate a declaration of war by the President.

Article 42 of the Constitution on the Right to Vote, which pegs the voting age at 18 years, has been made not entrenched. This means that it should not require a referendum to change the voting age.

It requests Parliament to enact an Affirmative Action Act — to protect the rights of women — within six months after the referendum.

The new provision requires the inclusion of representatives of political parties with representation in Parliament on the National Development Planning Commission (NDPC).

It also calls for the formulation of a National Development Policy Framework and requires two-thirds parliamentary approval for the framework to be operational.