Prince Harry has confirmed US actress Meghan Markle is his girlfriend, in a statement from Kensington Palace attacking the media for subjecting her to a "wave of abuse and harassment".

The statement said the couple were "a few months into a relationship" and it was "not right" that Ms Markle should be subjected to such treatment.

"But the past week has seen a line crossed," it added.

In recent days a number of newspapers have carried front page stories about the actress, best known for playing Rachel Zane in the TV drama Suits.

The statement issued by the prince's communications secretary said: "His girlfriend, Meghan Markle, has been subject to a wave of abuse and harassment.

"Some of this has been very public – the smear on the front page of a national newspaper; the racial undertones of comment pieces; and the outright sexism and racism of social media trolls and web article comments.

"Some of it has been hidden from the public – the nightly legal battles to keep defamatory stories out of papers; her mother having to struggle past photographers in order to get to her front door; the attempts of reporters and photographers to gain illegal entry to her home and the calls to police that followed; the substantial bribes offered by papers to her ex-boyfriend; the bombardment of nearly every friend, co-worker, and loved one in her life." 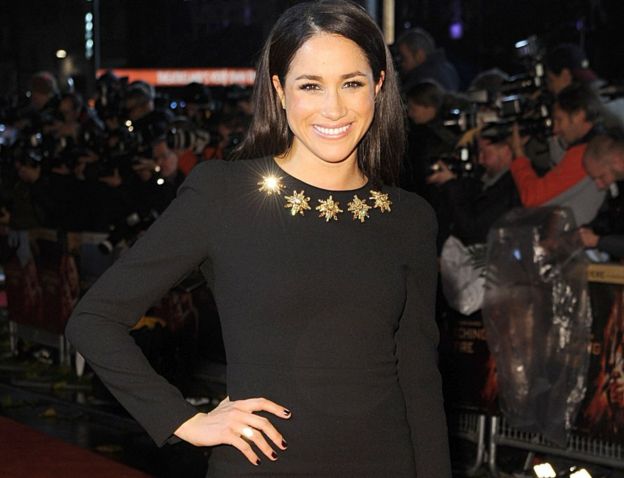 Meghan Markle's other acting credits include the 2011 movie Horrible Bosses

The 32-year-old prince has long had an uneasy relation with the press, having grown up aware of the impact that intense media intrusion had on the life of his late mother, Diana Princess of Wales.

BBC royal correspondent Nicholas Witchell said editors in the UK might abide by the prince's requests but it was unlikely to have an impact on foreign publishers as there was a considerable financial interest in pursuing stories about the relationship.

Our correspondent said the statement appeared to be a "cry from the heart" and showed how clearly Prince Harry was determined to protect this relationship after previous girlfriends had endured similar media attention.

The statement said Prince Harry was worried about Ms Markle's safety and that he "is deeply disappointed that he has not been able to protect her".

It added: "It is not right that a few months into a relationship with him that Ms Markle should be subjected to such a storm.

"He knows commentators will say this is 'the price she has to pay' and that 'this is all part of the game'. He strongly disagrees. This is not a game – it is her life and his."

The statement ended with Prince Harry appealing for "those in the press who have been driving this story [to] pause and reflect before any further damage is done".