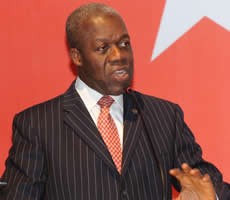 Vice President, Kwesi Amissah Arthur, has charged public health systems to devise strategies to deal with the risk of an Ebola outbreak in Ghana during the festive season.

He has also charged Ghanaians to be vigilant and avoid any possible source of the deadly Ebola virus as the festive season approaches.

The Vice President was speaking at the Annual General Meeting of the College of Physicians and Surgeons in Accra.

Joy News, Gifty Andoh Appiah who was at the programme said Mr Amissah Arthur who was speaking on emergency care in the country expressed concern about the poor sanitation system and challenged people to be extra vigilant while they celebrate the season.

He said interactions with medical practitioners across the sub-region indicate that the Ebola virus might take a long time before it is totally eradicated, therefore people should ensure that in all their interactions they apply the necessary safety measures to prevent an outbreak.

To reduce brain drain in the country, he asked the Ministry of Health to assess the needs of public health workers to enable government to properly deal with it.

The most widespread epidemic of the Ebola virus disease ever was recorded in the West African sub-region in 2014. It began in Guinea in December 2013 and then spread to Liberia and Sierra Leone.

A small outbreak of twenty cases occurred in Nigeria and one case occurred in Senegal. Both countries have now been declared disease-free.

Several cases have been reported in Mali. Imported cases in the United States and Spain have resulted in secondary infections of medical workers but have not spread further.

An independent outbreak in the Democratic Republic of the Congo that started in August 2014 has been shown by genetic analysis to be unconnected to the main epidemic.

As of 8 December 2014, the World Health Organization (WHO) and respective governments have reported a total of 17,991 suspected cases and 6,756 deaths, though the WHO believes that this substantially understates the magnitude of the outbreak with true figures numbering three times as many cases as have been reported.

The assistant director-general of the WHO warned in mid-October that there could be as many as 10,000 new Ebola cases per week by December 2014. Almost all of the cases have occurred in the three initial countries.