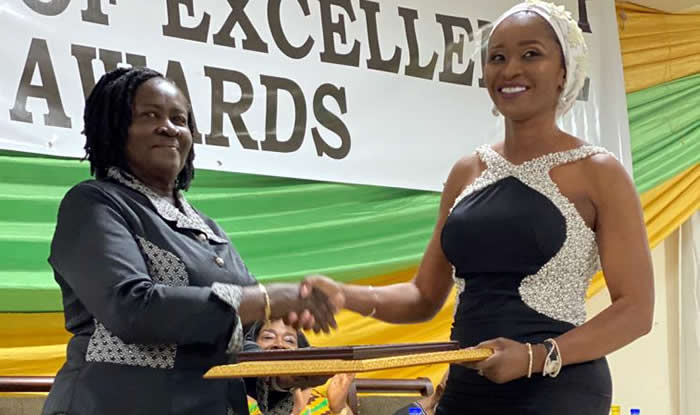 Puma Energy Board Chairperson, Mrs Salma Okonkwo, has made headlines again after she was recognised at the fifth Ghana Women of Excellence Awards.

Mrs Okonkwo’s recognition is in honour of her outstanding contribution to the country’s energy sector.

She was honoured together with some 23 other women at the event held in Accra recently for contributing in diverse ways to the development of Ghana.

It is the second time in less than four months that Mrs Okonkwo has been honoured at the Ghana Energy Awards.

In 2019 she was honoured for defying the odds to succeed in a male-dominated the oil sector.

Salma Okonkwo is one of the most highly respected business executives in West Africa’s oil and gas sector, a citation presented to the Puma Energy boss read in part.

“Who would have thought, me a former tomboy, often scolded for one mischief or another, would be nominated by my peers as a woman of excellence, truly, we serve a miracle-working God,” she said.

As an advocate for women being able to pursue their dreams and ambition, she said in today’s world where the fastest growing sector of entrepreneurs were women on the continent of Africa, it was only right that they created what was needed to achieve success.

Mrs Okonkwo said she was working with young women to bridge the gap to resources and alternative capital to help them forge ahead and take their rightful positions in the market place.

“As women adorned with the title of women of excellence, it is our duty to unite and pave the way for Ghanaian women to become empowered to successfully function in the national development of our beautiful country,” she said.

“We must motivate, encourage and provide a roadmap for navigating,” she added.

Mrs Okonkwo earned a license to operate as an official oil marketing company in 2008.

Since then, she has expanded her holdings and created the UBI Group, an integrated energy solution provider with five subsidiaries. In 2014, Salma sold 49 per cent of the UBI Group to Puma Energy which provides the company, technical and operational infrastructure.

A leader in energy development, Mrs Okonkwo is one of the most highly respected business executives in West Africa’s oil and gas sector.

She is also the co-founder and board member of Blue Star Exploration and sits on the Board of Directors of Makmera Upstream, an upstream exploration company and Nahid’s Properties, a real estate development company.

She is currently developing plans for a massive solar farm in the country and has received a mandate from the government to distribute that energy when ready, through the national grid.

She is an entrepreneur and a philanthropist who believes in excellence, hard work, the potential of Africa and aims to be a driver of prosperity in Ghana.