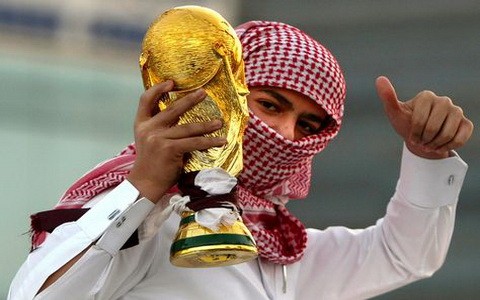 A member of the Qatar 2022 World Cup bidding campaign has told France Football she saw colleagues offering money to African federations in return for support for the Gulf state's candidacy.

Phaedra Almajid worked as the Qatar bid's press attach for international media between April 2009 and March 2010.

An American citizen with Arab origins, Almajid went with the bid team to the Confederation of African Football (CAF) congress in the Angolan capital, Luanda, in January 2010, some 11 months before FIFA controversially voted to award Qatar the right to stage the 2022 finals.

After being asked to serve as an interpreter for a Qatari official in a Luanda hotel suite, Almajid told France Football she witnessed significant sums being promised to individual African federations.

Almajid said: "I hadn't been warned about anything. The first person to come into the suite was an African football official. Charming and very imposing. We made small talk.

"The Qatari who was there expressed his delight that Africa was staging a World Cup the following summer and added that he felt it was legitimate for the Arab world to soon have their turn. We speak about the Football Dreams project of the Aspire academy. You can imagine the kind of conversation.

"Three other people are present. One of them, who only spoke French, made the first opening. They said that the Qataris were delighted that this important official was there and that they wished for his federation to have a donation of one million dollars.

"Not personally, of course. Let things be clear: I only ever heard talk of federations. The man replied, without even looking at the Qatari: 'Oh, a million dollars…why not a one-and-a-half million?' The Qatari said that he hoped he could count on his support. The person concerned assured him that would be the case. And that was it! I had never seen an offer so direct. I was shocked. And that person left."

Almajid said a second individual arrived shortly afterwards and the same scene was played out.

"The only difference, as would also be the case with a third visitor, is that the offer was immediately one of one-and-a-half million dollars," she added. "The Qatari told me I must never mention it. To no-one.

FIFA's Secretary General insists ongoing claims of corruption and confusion over the Garcia report have not cost them sponsors.

"He was shouting. It was two in the morning. I'm an Arab woman. He told me to shut my mouth and I had to obey them. I suppose they never thought a woman could disobey them. The Arabs call me a traitor because you don't do that among Arabs."

Almajid said she signed a statement retracting these claims, which filtered through to the British media, in July 2011 due to threats she had received and in fear of what may happen to her two autistic sons.

She gave evidence to Michael Garcia, the man appointed by FIFA to look into the attribution of the 2018 World Cup to Russia and the 2022 voting process, only after assurances of anonymity.

She claimed, however, that the subsequent publication of an overview of Garcia's report by Hans-Joachim Eckert, chairman of the adjudicatory chamber of the FIFA Ethics Committee, had identified her, and left her with no choice other than to speak out publicly.

"I didn't choose, Judge Eckert chose for me. Firstly, Qatar made me sign a document retracting my claims. And now FIFA is trying to silence me. Michael Garcia promised me confidentiality," she said.

"Nothing proves that he didn't respect that. I don't know anything more than what is in his report. I can't accuse him of anything. On the other hand, Eckert and FIFA have not been loyal to me. Eckert left me with no choice. He has thrown me to the lions by identifying me in his report. And FIFA owe me an explanation at least. What those officials did was so calculated."