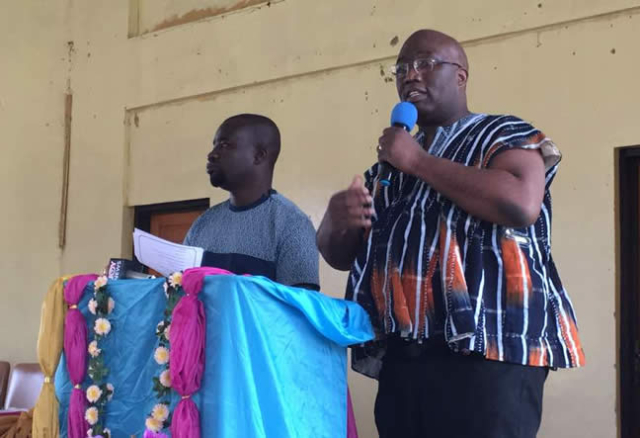 As part of government's efforts to revive the railway system in the country, a stakeholder meeting was held at the Bronkyenpem hall with the Nananom and people of Techiman in the Brong Ahafo Region.

This according to the sector minister and Member of Parliament for Essikado Joe Ghartey would boost development along the rail lines which is set to connect Accra and the capital city of neighbouring Burkina Faso.

According to Mr. Joe Ghartey, a Memorandum of Understanding (MoU) between the Government of Ghana and a Chinese company China Civil Engineering Construction Corporation (CCECC Ghana Limited) has been signed to develop the first phase of the project.

He pleaded on Nananom to support this project as it will bring development to the area as well as provide jobs to the teeming unemployed youth.

"One thing we have noticed is that there are always issues with lands when it comes to such constructions, so once we've signed an MOU with the Chinese to solicit for loan through the China EXIM Bank to start this, the time has come for us to engage the landowners and the people who are going to benefit from this and also to deal with all the outstanding land issues".

"I have the support of the MPs here, the traditional authorities and we shall continue discussing this with the people, the political authorities from both sides for us to ensure that by the time we attract the loan from China, hopefully by the last quarter of this year and the Chinese start building, they won't face any problems ". Mr. Ghartey added.

He again urged the people to take advantage of the new development in terms of business and transforming the area.

He disclosed that Techiman plays an integral role in the Kumasi to Tamale section of the line as a "railway station would be built in Techiman to link the southern part of the country to the north".

A former railway minister under the Kufour regime Prof. Akumfi Ameyaw who was also at the sitting said the NPP government has shown enough commitment towards building the rail system in the country adding that "the project will result in development which would help alleviate poverty and provide jobs for the people of the area. He, therefore, pleaded with Nananom to make the work of the ministry easy".

On his part, Nana Afena Nketia Twafohene of the Techiman traditional council emphasized Nananom's commitment to the project. He said once the intervention will create jobs for the youth and bring development to the area, Nananom would give their utmost support to such a laudable project.

He also assured that the chiefs will spearhead the campaign to convince individuals to comply with government in order for the project to be completed as planned.

Other traditional authorities present also made input emphasizing their commitment towards providing support to the ministry and the Chinese company in charge of the construction.