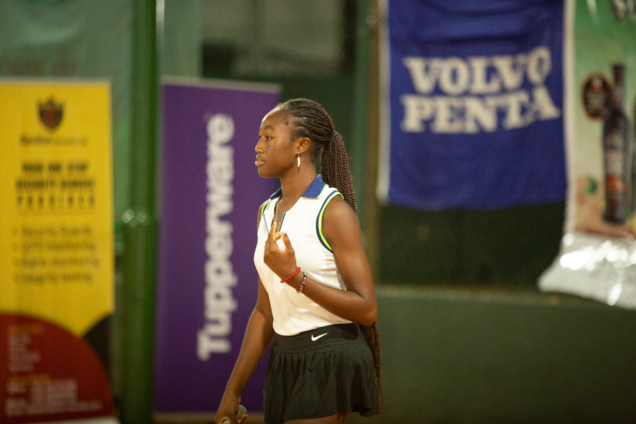 More than ¢8,000 was raised at the Rainbow Nations Challenge tennis tournament, to support underage female tennis players. The amount was raised via auctions of paintings and the certain packages from sponsors of the event.

The Rainbow Nations Challenge tennis tournament, organized under the auspices of the Ghana South Africa Chamber of Commerce, brought together 56 players from 23 countries across Africa, Europe, North America, South America, Asia and Australia, in the tournament’s maiden edition.

Played in a doubles event, four pools were run in a mini league where all-played-all, with the winners of the pools advancing to the semi-finals. Paul Pleva and Uwe German of the US emerged champions, after beating Britain’s Dough Hampshire and Ryan MacLeanto.

The winning duo were delighted with their triumph and pleased with the extracurriculars which accompanied it.

“It was great, it was a great experience playing this tournament. Such a cool idea bringing everyone in the international and Ghanaian community together, doing some networking and playing for a good course. It was great,” Paul Pleva said to JoySports.

His partner, Uwe German added: “Yeah definitely, the goal this week was to get out and meet new people, and we got to do that. We got to meet lots of Ghanaians, South Africans and people from all over the world. That was the goal and it was very successful in that regard.”

The tournament was also targeted at fostering diplomatic and business relations in the post-covid era. Harriet Sena Siaw-Boateng, Ghana’s ambassador to Belgium, explained why tennis, and not any other sport, was chosen to anchor their activities.

“We want to showcase other sports, not just football. I know that football binds us and brings us together and as Mandela said ‘you find togetherness in the sport’, and most of all, we want to add a little bit of it to the youth dimension to bring the young children to also appreciate the game and then, take it up as they move on.”

Sisu Tomegah and Shika McKorley, u15 tennis players, were involved in an exhibition match before the final of the main event.

President of the Ghana Tennis Federation, Isaac Aboagye-Duah, was delighted with the funds provided to support the development of other young female players like Tomegah and McKorley.

“It’s an exciting day for Ghana tennis, especially the girls tennis. It’s a good initiative from the Ghana South Africa Chamber of Commerce, who thought it wise to organize this charity program to raise funds to support girls tennis education and the sport.

“It has come at a very right time and as the head of Ghana tennis, I’m very excited,” the GTF president said in an interview.