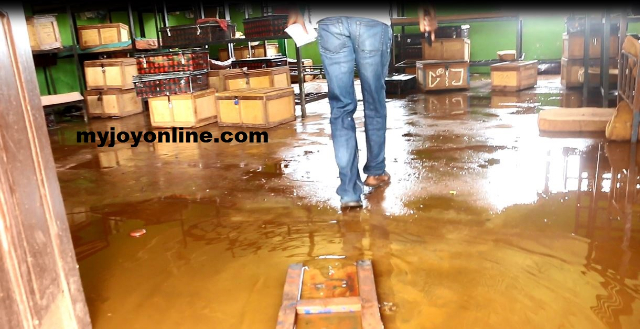 Over 200 students of Oppong Memorial Senior High School at Kokofu in the Ashanti region, have been displaced after rainstorm wreaked havoc on the boys’ dormitory.

The incident occurred at the time students were at the dining hall enjoying supper.

Authorities have been forced to convert classroom facilities into dormitories to accommodate affected students who are yet to come to terms with the incident.

Headmaster, Goin Prince Charles says the situation is adding up to the school’s already scarce infrastructure.

“Looking around, you can see the damages that were caused by the rains. It’s a heavy blow to the school because already we have serious housing deficit for our students and this is the main boys’ dormitory being affected by the rains,” he said.

“For some time now, we have been trying hard to see if we can get help from philanthropists or the government to add up to the boarding facilities that we have here but all to no avail. And as this issue has happened now, you can see that it has added up to the woes of the school,” he added.

Personal belongings of students, including mattresses, books and clothes soaked in water, welcome the first time visitor to the dormitory, which is filled with water.

Part of the ripped roof landed on a Mazda taxi cab which belongs to the Senior House Master after travelling about  20-meters mid-air.

Though no casualty was recorded, authorities are worried over the situation which has affected academic work in the school.

Goin Prince Charles is the Headmaster

“You can see the mattresses soaked, and their boxes, books; all of them affected. In fact close to 200 students are affected and we have some of the classrooms that we can open so we housed them there yesterday.”

Built 42-years ago as a private facility but later absorbed by government, the school is bedevilled with infrastructure deficits including teachers’ accommodation.

Mr Goin wants government intervention to ameliorate the plight of students and teachers of the school.

“A school, large as this with a population of 1,600 we have only three master’s bungalows; one for myself as headmaster of the school, one for an assistant head-in charge of academics and then we have one that is being shared by three tutors. It’s something that is very worrying. We are pleading with the government to come to our aid.”