Ramaphosa congratulates Akufo-Addo on “African of the Year” recognition - MyJoyOnline.com

Ramaphosa congratulates Akufo-Addo on “African of the Year” recognition 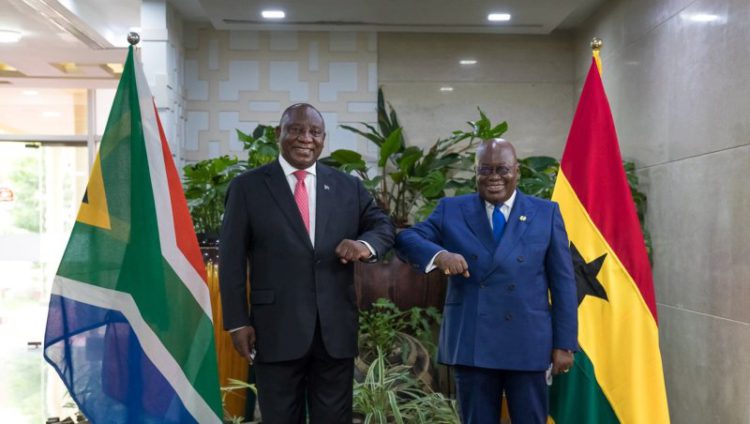 South African President Cyril Ramaphosa has applauded President Nana Addo Dankwa Akufo-Addo for his recognition as the “African of the Year” by Forbes Africa Magazine.

Forbes Africa, one of the continent’s most influential business magazines, in its December 2021 to January 2022 edition, featured President Akufo-Addo and named him “African of the Year”.

The magazine said on its Twitter handle that what had earned President Akufo-Addo the enviable recognition was that he was “focused on a new paradigm of economic growth in Africa”.

“Ghana’s President has repositioned the country in the global marketplace as one reliant on its own resources and strengths,” the Magazine said.

“This recognition by the Magazine is about your vision not only for Ghana but for the people of our continent as well,” President Ramaphosa said at a banquet held in his honour by President Akufo-Addo at the Jubilee House, Accra on Saturday night.

“We are proud of the recognition because it speaks of your commitment…it speaks of your creativity, innovation and your clear strategic vision of what should happen in your country as well as our beloved African continent,” President Ramaphosa said.

The South African President is in Ghana for a two-day visit with a strong government and business delegation aimed at re-affirming the ties of co-operation and the bonds of friendship between the two countries.

Earlier, the two presidents held bilateral talks and discussed how to boost further political and economic relations, cultural and people-to-people exchanges, as well as co-operation at the continental and multilateral levels.

Their deliberations also centred on driving investment opportunities, domestic and foreign, into both countries, the realisation of the 17 SDGs, and the need for enhanced co-operation and partnership in the areas of education, trade and industry, agriculture, defence co-operation, immigration, environment, science and technology, petroleum and hydrocarbon activities, and tourism.

To consolidate relations between the two countries, four agreements on immigration, gender, agriculture and transport were signed during the bilateral exchanges, with commitments to explore areas of new economic, trade and investment cooperation, especially in Ghana’s key sectors of road, railway infrastructure, mining, energy, manufacturing as well as Agro-processing.