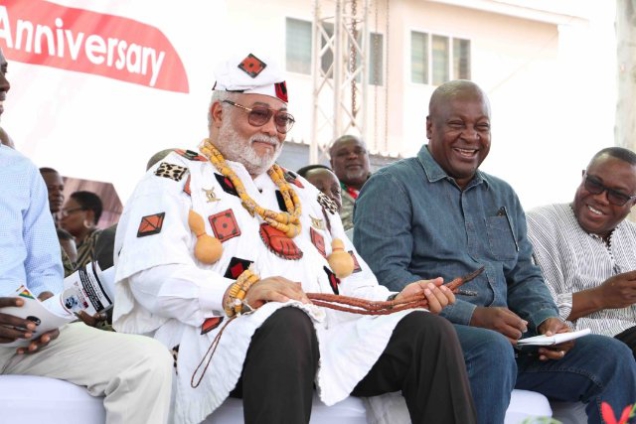 Former President John Mahama has said that the legacy of former President Jerry John Rawlings will continue to inspire generations to commit to the development of their communities like he did.

“You strode onto Ghana’s political stage like a colossus and played many parts. Your part in the political drama has left an enduring legacy for our nation.

“You may be gone but your memory will continue to inspire countless generations of Ghanaians to challenge the status quo and use their non-conformism to spur societal progress,” he stated.

Speaking at the burial of the founder of the National Democratic Congress (NDC), Wednesday, John Mahama said that Rawlings embodied the virtues of truth, probity and accountability.

Mr Mahama, in his tribute to the late statesman, pledged to imbue these virtues in the NDC as a means to entrench Rawlings’ legacy for posterity.

“None can match your political astuteness, wit and charisma. For those of us the comrades you’ve left behind, it is time to close ranks and collectively work to guarantee the unity and survival of your party NDC as a vehicle that entrenches your memory and legacy for posterity,” he said.

He noted that the 1992 Constitution drafted under the governance of Rawlings gave birth to one of the most enduring democratic countries in Africa, and “Ghana has you to thank for this,” he added.

According to the NDC’s 2020 presidential candidate, the death of Jerry John Rawlings has left a huge vacuum in the country’s political context including the NDC as a party.

In addition, he said that the position and contributions of Jerry John Rawlings in Ghana’s democracy will forever remain unmatched and will withstand the test of time.

“It would take a whole book to write a tribute to a man whose life was so eventful; a man who has had a profound impact on several generations of Ghanaians.

“You were and remain the soldier of a lifelong and restless quest for freedom and justice. Flt Lt L. Rawlings, Chairman of the AFRC. Chairman of the PNDC, leader of the revolution, 1st President of the 4th Republic of Ghana, rest in eternal peace,” he concluded.