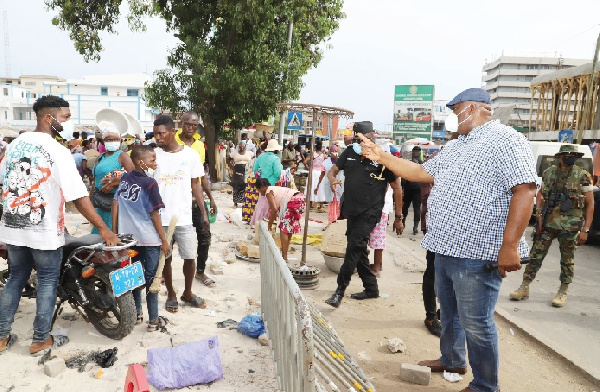 He reminds me of some of the characters featured in the 1986 BBC comedy – “YES, Prime Minister”.

I have been reflecting and thinking it was time for a satirist or any of our creative television outlets to introduce a comedy programme dubbed “Yes Minister”, focusing on achieving and non-achieving ministers’ performances but in a humorous manner.

As we press for accountability and service to the people, such a programme would be aiming to encourage or draw attention to good and poorly performing appointees.

My column this week focuses on an up and about Minister, who, in the last seven months, is seemingly working towards good outcomes.

Earlier this week, in compliance with the President’s latest update on Covid-19 protocols, the Regional Minister, as head of the Regional Security Council, signed a widely publicised Media Release detailing the measures being put in place for the curbing of the increasing number of cases in the region.

What I like most about the release is the order for random spot checks at all public spaces, causing arrests for breaches with fines or prosecution where necessary.

The recklessness of others in the public space needs to be firmly curtailed, and severe sanctions applied. I am up for this Regional Minister who, together with his team of experts, seem battle-ready for the job that has not been sustained by others, especially with the deadly Delta variant in our midst.

I have never met the Regional Minister.  However, in the few months, he has been in office, I find his approach to issues, his firmness in dealing with debilitating issues affecting the welfare of others, has won my respect and admiration.

His moves, so far, have been right and to the point.  He came with actions that stood taller than him. But so far, so good.

In the last few months in office, he has moved with the giant steps of Goliath in his stride and won hearts as young David did with his sling.

I have followed him since he launched his action plan to get Accra to work again. Why not? Every proud Ghanaian would like to see the capital work again.

So far, there have been no false positives in any of the actions he has taken to get Accra to work.

He has led some of the demolition of unauthorised structures in the city, stamping his presence and authority over those impunities even with the law enforcers around. On television, one watched with admiration how he would not give in to the owner of one unauthorised Church building under construction. He could not be faced with the insinuations cast around him and the plea that the owner was his own relation.

His direct reply to the man was that they were not doing the business of friends and relations. That is the kind of firmness one has not seen in previous attempts to beautify, sanitise or make Accra work.

Talk about jobs for the boys, streamlining motorcycles and tricycles in the city,  keeping one’s outside surroundings tidy are all on his agenda. But, upmost on his mind perhaps is his agenda to make Accra work and work for real.

So if Accra should work for real, then a myriad of actions, including congestion and indiscriminate siting of unauthorised structures, should be fixed. For those of us who live in the capital city, we know that Accra cannot work again without decongesting Agbogbloshie for the decades-old Odaw river project and others to move ahead.

The beautiful outcome of relocating onion sellers from Agbogbloshie to a spacious area in Adjin Kotoku has goaded the spare parts dealers in Abbosey Okai to ask for relocation from their congested place at Abbossey Okai.

How can the capital city work again without fixing the impunities and enacting bye-laws to challenge the audacities of commercial motor and tricycle riders who have invaded our city centres and highways? The Regional Minister says he will fix all that to make Accra work again.

He is bent on creating job opportunities for community youth who are open for jobs as sanitation enforcers or “Nsamansaman” to police his “operation clean your frontage” programme. Not a bad idea though we have heard it umpteen times.  Will Henry Quartey do it this time around?

Most of the things he has said he will do for the Greater Accra Region and Accra, in particular, are not new.  However, what stands him out are some of the positive actions he has brought into action and which were left uncompleted in prior years.

So, yes, Minister. May the make Accra plan work to our surprise and let Greater-Accra Region shine for good.

The writer can be reached via email: vickywirekoandoh@yahoo.com.