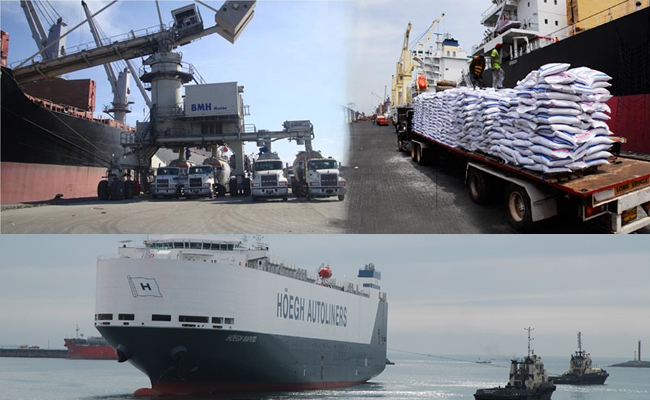 The reduction in the benchmark values of imports has failed to yield the intended results, data from the Ghana Shippers' Authority (GSA) shows that rather than increasing, goods coming into the country fell by more than 11 per cent after the policy was implemented in April, this year.

The reduction in benchmark values was expected to boost the volume of imports through the country's ports but three months after its implementation, import volumes are rather dropping.

The development is in spite of the review of the benchmark values which translated into general goods being slashed by 50 per cent and that of vehicles also seeing a 30 per cent reduction in April this year.

For instance, the total volume of goods imported through the country’s two seaports ( Tema and Takoradi) dropped from 7.16 million tonnes as recorded in the first half of 2018 to 6.35 million tonnes in the same period this year. This represents an 11.31 per cent decline.

The data from the GSA released recently indicated that the development was influenced by decline in imported commodities such as petroleum products, bulk cement, bagged rice, chemicals and bagged sugar.

The data also revealed that transit goods recorded a paltry growth of 2.89 per cent to 587,537 tonnes for the period under review while export volumes on the other hand recorded an impressive increase of 42.04 per cent to 5.72 million tonnes against the 4.03 million tonnes.

Rather than increasing volume of goods, the President of the Ghana Union of Traders Association (GUTA), Dr Joseph Obeng, in an interview with the GRAPHIC BUSINESS on Friday, September 20 in Accra, observed that the reduction in the benchmark values had helped to maintain prices of goods.

According to him, the drop in the volume of goods could be attributed to a litany of challenges which consist of over populated markets and financial difficulties on the part of traders.

He said the market had been over-saturated with goods of which some were imported through unapproved routes.

"Based on our own assessment, 80 per cent of these foreigners in our markets, especially those from neighbouring countries, import goods through their home countries and then transport them through unapproved routes where they are not recorded for the right taxes to be paid to the state," he said.

Also, Dr Obeng indicated that most of the importers currently had their working capital locked up in some of the financial institutions that collapsed through the funancial sector clean-up.

"One of our members deposited money at a savings and loan company on Friday, the following Monday when the person was going for the money, he was told that the said financial company has collapsed," he added.

The views of the president were corroborated by the Executive Secretary of the Importers and Exporters Association of Ghana (IEA), Samson Awingobit Asaaki, who also blamed the reduction in import volumes to a drop in consumer purchasing power.

"Most of the warehouses have been packed with goods yet no one is buying because there is no money in the system and traders cannot also import new goods while the old ones are still in stock," he said.

He stated that uncertainty among importers with regard to government trade policies such as the review of the date used in calculating the exchange rate for duty on imported goods at the country's ports could also be blamed for the drop in import volumes.

“And so the review of the benchmark values introduced in April 2019 had nothing to do with the declining of import volumes,” he said it had rather encouraged the few volumes recorded under the period.

The government had indicated strongly that it would make changes to benchmark values in the 2020 budget.

Tax expert and Managing Partner of Ali-Nakyea and Associates, Mr Abdallah Ali-Nakyea, underscored the need for the review of the benchmark values.

He added that traders who imported goods would take advantage of the loopholes in that particular customs policy to cheat the state and so reviewing it was crucial to make it more effective to serve its purpose.