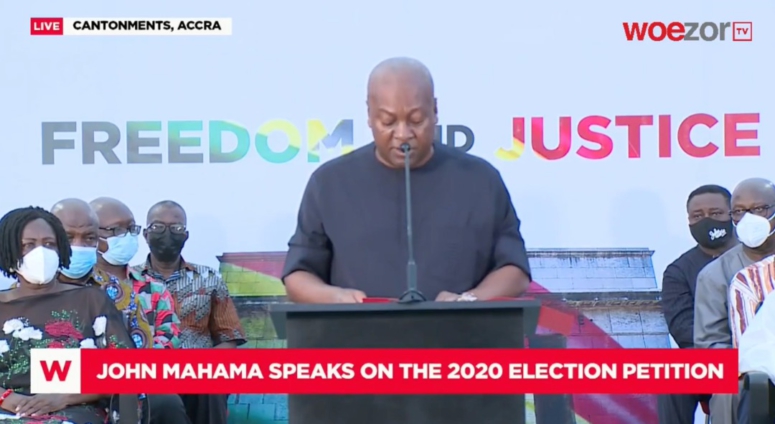 Former President and Petitioner, John Dramani Mahama says the refusal of the Chairman of the Electoral Commission to testify sets a bad precedent for the future of Ghana’s state institutions.

According to him, Jean Mensa was aided “by her counsel and the court to avoid explaining to the good people of Ghana from her own testimony under oath in a properly constituted Court of Law the errors she herself admits that she had committed in the declaration of the 2020 Presidential election results.”

This refusal he says, gives room for “other heads of state institutions to adopt an approach of opacity and non-accountability in their work. Just because they can rely on unconvincing interpretations of our laws to shield them from scrutiny in the near future.

Addressing the nation after this afternoon’s verdict, he elaborated that the NDC and all Ghanaians expected Jean Mensa to testify because the Petition sought to provide an opportunity for transparency and accountability in the management of the country’s electoral processes.

Additionally, he stated that it was an embarrassment on the justice delivery system in not allowing Mrs. Jean Mensa to testify or answer any questions when requests were made by the party to interrogate and inspect her documents.

“Requests for interrogatories were dismissed, a request for the inspection of documents in possession of the Commission was turned down, The request for the admission of facts were ignored.” he stressed.

“This is a clear stab in the heart of transparency and accountability to the sovereign people of Ghana. Whatever the reasons for not allowing Mrs. Jean Mensa to testify or answer any questions, it leaves an embarrassing stain, not only on our justice delivery system but also, on the nation’s
electoral system,” he added.

He however encouraged Ghanaians and party members who were expectant for a win to hold their heads up high and channel their disappointment into hard work.

This he said will ensure that, come 2024, “we will achieve a truly transparent and fair election, which we all as Ghanaians can be proud of.”

DISCLAIMER: The Views, Comments, Opinions, Contributions and Statements made by Readers and Contributors on this platform do not necessarily represent the views or policy of Multimedia Group Limited.
Tags:
Election Verdict
Electoral Commission
John Mahama