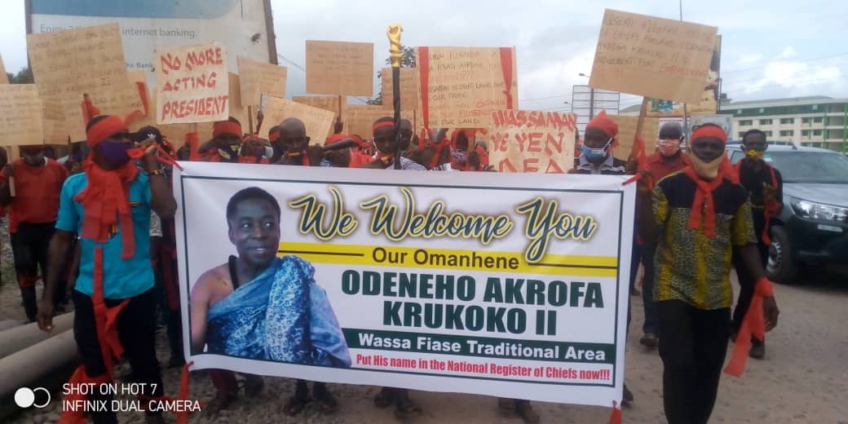 The chiefs, elders and residents of Tarkwas on Tuesday took to the streets to demand the reinstatement of Odeneho Akrofa Krukoko II as the Paramount Chief of Wassa Fiase in the Western Region.

The protesters, clad in red marched drummed home their demands, warning that they would advise themselves if their Paramount Chief is not reinstated before the end of the year.

The angry chiefs and residents also appealed to President Nana Akufo-Addo to intervene in the matter in order to restore peace in the area.

She argued that Odeneho Akrofa Krukoko II has been cleared by both Western and National House of Chiefs to be reinstated to continue his kingship as the Omanhene after his conviction in 2002 by the Sekondi High court for contempt.

Nana Abena Kunadjoa II further called for the transfer of the registrar from the Wassa Fiase Traditional Council, for allegedly overstaying his tenure and demonstrating gross disrespect to Odeneho Akrofa Krukoko II and the entire membership of the royal family.

She also called for an immediate audit into all transactions on the finances of the Wassa Fiase Traditional Council.

Odeneho Akrofa Krukoko II was convicted in 2002 by the Sekondi High Court for contempt and subsequently destooled following his conviction.

Odeneho after serving the jail term appealed the contempt charge at the Appeal’s Court where it was squashed in July 2003.

The Judicial Committee of the Western Regional House of Chiefs on August 19, 2015 ruled in favour of Odeneho Akrofa Krukoko II, stating that there was no valid destoolment of Odeneho thus the Paramount Chief was not destooled in April 2002.