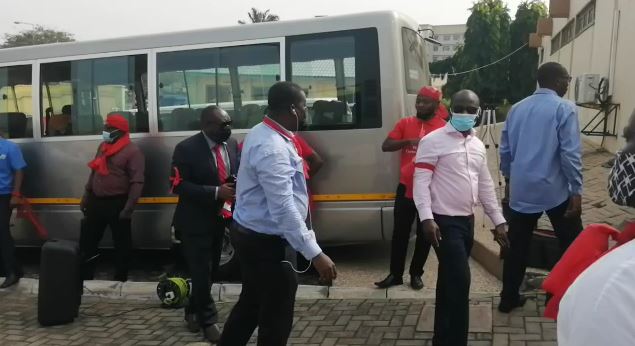 The National Labour Commission (NLC) has directed the staff of the National Lottery Authority (NLA) to suspend the withdrawal of their services and return to their working posts with immediate effect.

The decision by the Commission comes after a meeting with various stakeholders following a withdrawal of service by workers at the NLA over claims of imminent danger pursuant to Section 119 (1) of Act 651.

In a press release sighted by JoyNews, the National Labour Commission described the action of staff at the NLA as “unfair and wrongful.”

Earlier today, General Secretary for the Financial, Business, and Services Employees Union of the NLA, Benjamin Mingle in an interview with JoyNews indicated that the administration of the Authority has failed to settle winners of big lottery games across the country.

He, therefore, called for the immediate dismissal of Kofi Osei Ameyaw, the Director-General of the National Lottery Association.

However, upon hearing the various aggrieved parties, Monday, the National Labour Commission has directed all NLA workers to return to work and “ensure that the Draw for today, March 1, 2021 is held”.

In response to these issues, the NLC has further tasked the management of the Authority and the Union to arrange a meeting by Friday, March 5, at the very latest to discuss the grievances presented by the workers.

“Management must assure the workers of their safety and accordingly provide security to ensure their safety,” the NLC concluded.