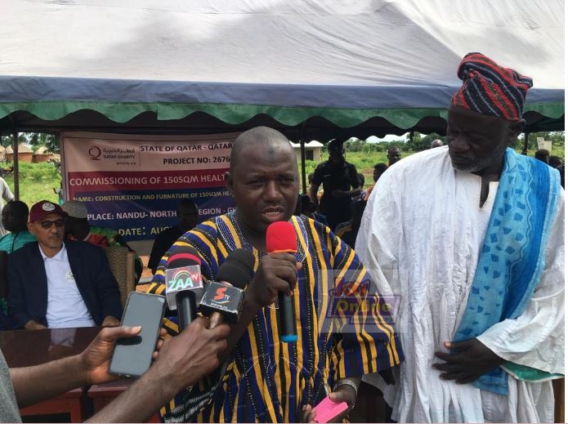 The Member Parliament for Kumbungu, Dr. Hamza Adam has appealed to government to review the National Health Insurance Scheme (NHIS) because it has become ineffective.

According to him, most Ghanaians have lost faith in the National Health Insurance cards.

The MP made the appeal at the commissioning of a health facility for the people of Nandu and 10 other communities.

The facility which is expected to serve about 110,000 people, is fully furnished with medical equipment and drugs.

With funding from the Qatar Charity, a Non-Governmental Organization, the facility also comes with a delivery room, laboratory, OPD, quarantine room, pharmacy, consulting room, washrooms, male and female wards, among others.

The MP said prior to the completion of the project, patients had to travel several kilometres to other health facilities to access health care.

This, he said, sometimes resulted in deaths, especially among pregnant women because of the long distance they travel.

“We have had a number of cases where in the process of trying to give birth some of them lose their lives, because of lack of access to health facilities. This edifice has a delivery room that will make it easier for our mothers to deliver peacefully when they are in labour.”

He said one of his priorities as a Legislator is to support the provision of health services to his people, the reason he sought support from the Qatar Charity to provide the edifice.

Dr Hamza pledged his commitment to continue supporting the District Health Directorate to deliver quality health services to his people.

He commended Qatar Charity for their donation, urging them to continue with support for humanitarian works.

The Country Director for Qatar Charity, Ahamed Adam said, Qatar Charity is an NGO that has implemented more than 3,500 projects across the country including the Nandu community.

He believes the facility will improve health service delivery in these communities.

Osman Hudu Abu, a representative of the District Director of Health Services in the Kumbungu District, said the health personnel are poised to work.

He appealed to government to provide the area with a district hospital to facilitate health care delivery.

A staff Midwife in the District, Asibit Bernard Esther, said previously they used to offer health services under trees and sometimes in mosques but that will become a thing of the past with this new facility.

“It will benefit us a lot because women used to go to other catchment areas to access health care but with this edifice, we will be able to give them proper health care and also have a place to deliver our services instead of sitting under trees or in the mosque to deliver health service,” she added.

She appealed to the authorities to speed up the electrification process in the community so they can effectively work.

DISCLAIMER: The Views, Comments, Opinions, Contributions and Statements made by Readers and Contributors on this platform do not necessarily represent the views or policy of Multimedia Group Limited.
Tags:
Dr Hamza Adam
NHIS