Protesters have scaled the Arc de Triomphe in central Paris, following clashes with riot police during a third weekend of "yellow vest" rallies.

What began as protests over President Macron's fuel tax has transformed into general anger at high living costs.

At least 65 people have been injured, including 11 members of the security forces.

Earlier this week, he tried to strike a conciliatory tone, saying he was open to ideas about how the fuel tax could be applied. 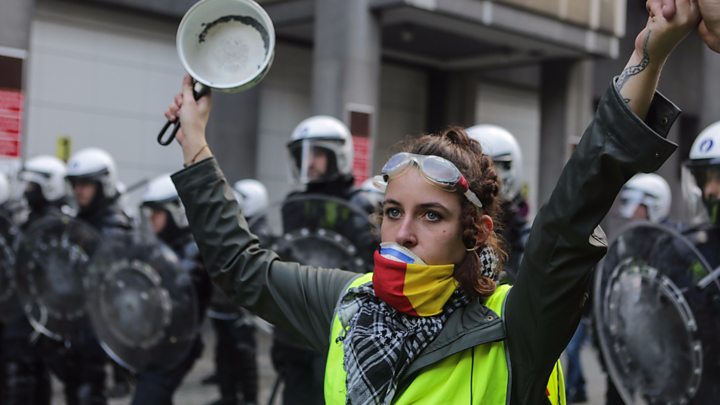 But his speech does not appear to have gone far enough in assuaging people of the view that he is out of touch with ordinary people.

What is the latest on the clashes?

Saturday's clashes began even before the official demonstration started in central Paris, as police locked down the popular tourist avenue of Champs Elysees and searched people as they were going in.

Several shops, banks and cafes had boarded up their windows before about 5,500 people descended on the area. 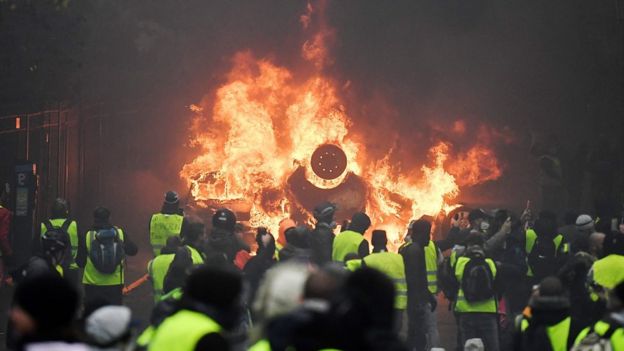 At least one car was overturned and set on fire

Among the peaceful demonstrators, who held up slogans such as "Macron, stop treating us like idiots", there were those hiding their faces with masks and goggles.

Police fired tear gas, water cannon and stun grenades to disperse protesters who were trying to tear down the barricades. A number of police officers, wearing protective gear and helmets, were spattered with vivid yellow paint.

Interior Minister Christophe Castaner, who visited the scene, tweeted that there were "1,500 agitators outside the security perimeter who came to fight".

He called the protests "an insult to the republic."

Prime Minister Edouard Philippe said there had been 107 arrests.