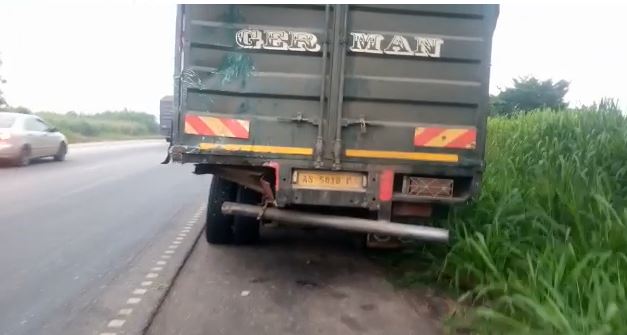 Four people have died in an accident at Nobwem – New Koforifua in the Asante Juaben municipality on Friday.

This was confirmed by the Konongo Police Motor Traffic and Transport Department (MTTD) in the Ashanti Region.

Eyewitnesses say the Sprinter bus with registration number, AC 910-19 crashed into a cargo truck with number, AS 5818-P causing nine others to sustain injuries.

Both vehicles were heading from Accra towards Kumasi when the incident occurred at about 3:00am.

One of the survivors, Agyeman Joseph, told Adom News that, “there were between 22 and 24 passengers on the car at the time of the accident.”

Agyeman Joseph further explained they cautioned the driver to reduce the speed on that stretch of the road, but he paid no heed.

“I slept for a while but when I woke up, I realised our bus has smashed into another truck. It was crazy,” he told Adom News‘ Amoako Poncho .

The injured are receiving treatment at the hospital.

Meanwhile, a Senior Emergency Medical Technician (EMT) of Asante Akyem central, Charlotte Ofobiri, who was one of the first responders at the scene, pleaded with government to provide them with personal protective equipment to improve their services.

Charlotte Ofobiri also told the news team that erratic supply of electricity posed a challenge to their efforts to save lives of accident victims.

According to her, one of the survivors who needed blood to be sucked out of her system, had to wait in pain as electricity supply had been disrupted.

The medical officers waited for the electrical power to be restored before they could administer the procedure to save the patient’s life.