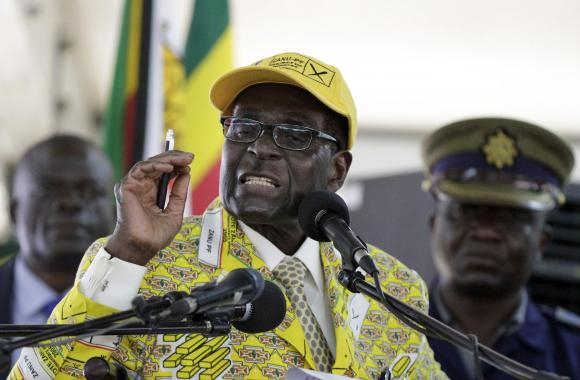 The eldest son of Zimbabwe's first lady Grace Mugabe has been convicted of manslaughter and fined $800 (£520).

Russell Goreraza knocked down and killed an unidentified man in his car in the capital, Harare, in February.

"I regret and want to apologise for the incident," President Robert Mugabe's 31-year-old stepson told the court.

The magistrate said he had considered cancelling the accused's licence and sending him to jail but opted for a fine because of his remorse.

Douglas Chikwekwe said that the fact that Goreraza was a first-time offender had also affected his decision.

The BBC's Brian Hungwe in the capital, Harare, says many are shocked by the fact that Goreraza did not get a jail term.

Sentencing for culpable homicide varies depending on the magistrate and their interpretation of the circumstances, but two-year prison terms have been handed down in similar cases.

Friends and relatives of Goreraza, who did not have a lawyer to represent him, attended the hearing, but not the first lady, our reporter says.

The name of the person run over by Goreraza was not revealed in court, he says.

After the sentencing, intelligence officers tried to prevent prison officers from taking Goreraza away to the cells to pay his fine.

Goreraza stayed inside the cells until the media outside had left, so he could avoid the cameras, our reporter says.

He is Mrs Mugabe's first son from her marriage to Stanley Goreraza, a diplomatic military attache.

Unlike his mother, he has steered clear of politics and has mining and farming interests.

Mrs Mugabe began a relationship with President Mugabe whilst working as a typist in state house in the late 1980s.

They married in 1996 and have three children.