Ronald Koeman sacking by Barcelona 'only a matter of time' - Guillem Balague - MyJoyOnline.com 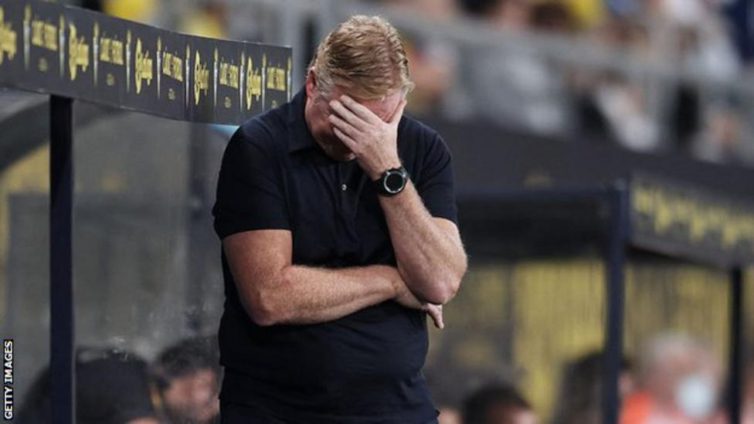 Barcelona are set to sack manager Ronald Koeman and it could even happen before they next play, says Spanish football expert Guillem Balague.

Barca have lost both their Champions League group games 3-0, with Wednesday’s defeat at Benfica particularly damaging.

They are unbeaten in La Liga but are sixth after three draws from six games.

“It’s just a matter of time until we hear that Koeman has been sacked,” said Balague.

“There was a meeting between the decision-makers, including president Joan Laporta, after their flight landed back in Barcelona from Lisbon. They went to the training ground, which is not far from the airport, and they’re putting a plan together.

“Timing is of the essence, not only to get rid of Koeman but also to get a plan in place.”

Koeman and Laporta have had a strained – bordering on toxic – relationship since Laporta was elected as club president in March.

The former Netherlands boss has had to deal with the fallout from Barca legend Lionel Messi’s departure from the Nou Camp and is also in charge at a time when the club is in dire financial straits.

“Koeman won’t be in the dugout for the game at Atletico Madrid on Saturday because he’s suspended, so they are wondering: ‘Does it make sense to do it now or wait until after the game?'” added Balague.

Belgium manager Roberto Martinez has been considered the favourite to take charge should the Barca job become vacant.

Laporta is an admirer of Martinez’s approach and it helps that the former Everton boss has a strong relationship with Barcelona’s sporting advisor Jordi Cruyff, though the ex-Manchester United winger will not be involved in any appointment process.

“Martinez is what Laporta is looking for,” said Balague. “He is someone who understands the club, who has an admiration for Johan Cruyff and his philosophy and he has adapted well wherever he has been. He plays the type of football – building from the back, playing through the thirds – that the president wants.”

But there are other names in the frame too.

Marcelo Gallardo of River Plate is a contender but is thought he would not be willing to leave the Argentine club midway through a season, while ex-Juventus manager Andrea Pirlo has also been mentioned.

But is a Barcelona playing legend who could be best placed to challenge Martinez for the role.

“Xavi is the one who seems to suit everyone’s interests best,” said Balague.

“The fans like him, the media like him, he is ready to take over, there won’t be an issue with money and he knows the club.

“He would give the kind of hope that everyone needs given how negative the narrative has become and would do so while the finances get sorted, which will take a long while.

“But Laporta feels he’s not ready yet and doesn’t want to burn him out. He needs convincing.”