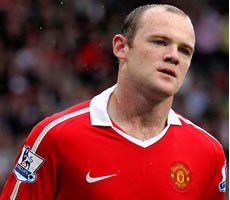 Manchester United man Wayne Rooney has hit out at Sky commentator Martin Tyler after comments made in the match on Sunday, according to The Mirror.

The England star was deemed lucky to stay on the pitch after a controversial tackle was made in United’s draw withCardiff.

Rooney admitted on twitter later that night that the tackle was not one of his finest, but criticised Tyler for the comments referring to the tackle that he made throughout Sky’s coverage of the game.

The game which finished 2-2, was not without confrontation between the two sides, with Gary Medel of Cardiff looking like he tried to slap Marouane Fellaini in the second half.

The off-ball collision between Rooney and Jordon Mutch was the incident that Martin Tyler picked up on most however, with Rooney scoring to give United the lead just moments after he had kicked the Cardiff player.

“I agree mine was bad tackle and ref dealt with it.

“And Martin Tyler didn’t shut up about it all game.

“Then someone slaps someone in face and he doesn’t speak a word about it.

The referee decided to give the striker a yellow card for his challenge which occurred after seven minutes, but the whole United team looked frustrated throughout the game.

David Moyes’ side never quite managed to get a hold of the game, and despite going ahead twice in the Welsh capital, a goal from Kim-Bo Kyung in the 90th minute was enough to ensure that both teams went away with a share of the spoils.

Rooney’s goal came in the 15th minute, before Frazier Campbell equalised on 33 minutes, only for Patrice Evra to score a header to put United in front heading into half time.

The result meant that United now sit in sixth place, with rivals Manchester City climbing above them in the table.