Russia has launched its biggest military exercise since the Cold War, involving about 300,000 service personnel, in eastern Siberia.

China is sending 3,200 troops to take part in "Vostok-2018", with many Chinese armoured vehicles and aircraft. Mongolia is also sending some units.

The last Russian exercise of similar scale was in 1981, during the Cold War, but Vostok-2018 involves more troops.

The week-long manoeuvres come at a time of heightened Nato-Russia tensions.

As the exercises began, Russian President Vladimir Putin met his Chinese counterpart Xi Jinping at a forum in the eastern city of Vladivostok and told him "we have a trusting relationship in the sphere of politics, security and defence".

Relations between Russia and Nato – a 29-member defence alliance dominated by the US – have worsened since Russia annexed Crimea from Ukraine in 2014.

Kremlin spokesman Dmitry Peskov said the drills were justified given "aggressive and unfriendly" attitudes towards Russia.

What will happen in the drills?

Tuesday and Wednesday will see planning and preparation while actual operations will start on Thursday and last five days, the head of the Russian general staff, Gen Valery Gerasimov, was quoted as saying.

The Russian defence ministry says 36,000 tanks, armoured personnel carriers and armoured infantry vehicles will take part in Vostok-2018, from 11 to 17 September, along with more than 1,000 aircraft. Vostok is Russian for east.

The exercise will be spread across five army training grounds, four airbases and areas in the Sea of Japan, Bering Straits and Sea of Okhotsk. Up to 80 naval vessels will take part, from two Russian fleets.

The drills will not be near the disputed Kuril islands north of Japan, Russia says.

The ministry's TV channel Zvezda says three brigades of Russian paratroops will play a key role, during drills at the Tsugol military range, near Russia's borders with China and Mongolia. 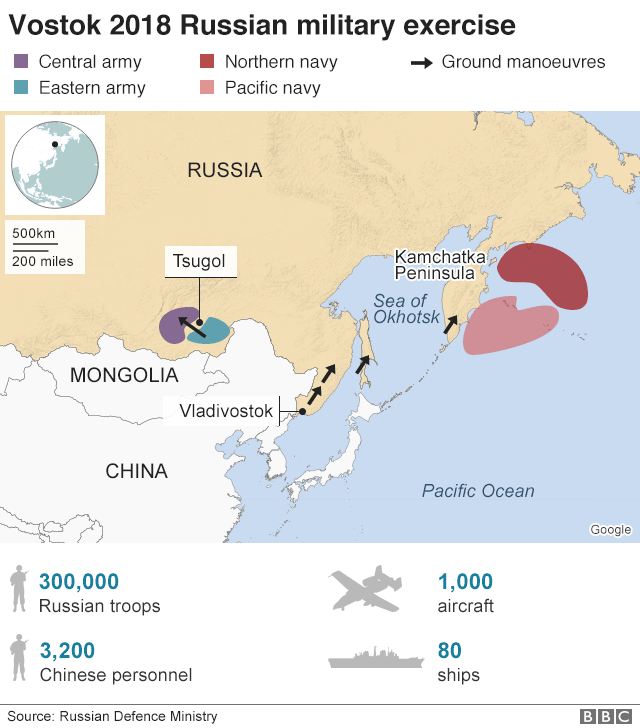 A key aim is to practise the rapid deployment of thousands of troops, as well as aircraft and vehicles, from western Russia to eastern regions, across thousands of miles, TV Zvezda reports. That involves in-flight refuelling of fighter jets.

The scale of Vostok-2018 is equivalent to the forces deployed in one of the big World War Two battles.

Why is this happening now?

President Vladimir Putin has made military modernisation, including new nuclear missiles, a priority.

Russia's armed forces are reckoned to have about one million personnel in total.

A Russian senator and reserve colonel, Frants Klintsevich, said "it suited the West that our units and headquarters lacked combat skills and co-ordination, but times have changed; now we have a different attitude to combat readiness".

Why is China involved?

The Chinese defence ministry spoke of deepening military co-operation and enhancing both sides' ability to jointly respond to "various security threats", without specifying those threats.

Mongolia has not given details of its involvement. 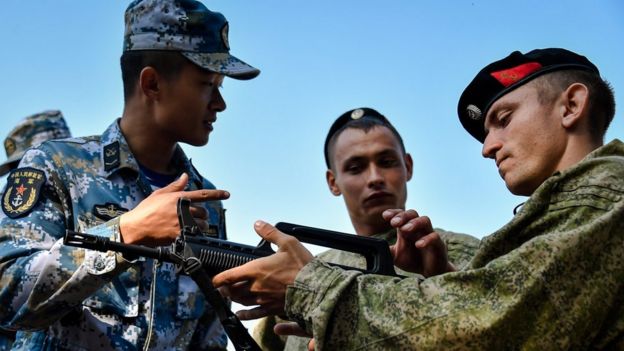 China has imposed heavy security and censorship in the mainly Muslim Xinjiang region.

Xinjiang has seen intermittent violence – followed by crackdowns – for years. China accuses Islamist militants and separatists of orchestrating the trouble.

In recent years Russia and China have deepened military co-operation and during these drills they will have a joint field headquarters.

Why are China-Russia ties warming?

Observers say the two sides have been building ties partly as an attempt to counter the US's international influence.

They have also been boosting economic co-operation, with Chinese direct investment soaring by 72% in 2017, according to state news agency Xinhua. 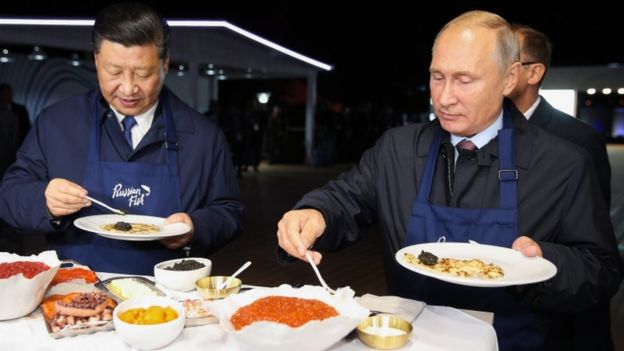 As Beijing has become embroiled in a tit-for-tat trade dispute with Washington this year, Russia has become an increasingly important trade partner and is now China's ninth largest.

Russia is now China's biggest oil supplier and its largest energy company, Gazprom, is building a 3,000km (1,864mi) gas pipeline that will link eastern Siberia to the Chinese border.

Mr Putin and Mr Xi are said to get along well too – in June, the Chinese leader called his Russian counterpart his "best, most intimate friend".

It is a big contrast from the Cold War years, when China and what was then the USSR were rivals for global communist leadership and clashed on their far eastern border.

What has Nato said about the drills?

Spokesman Dylan White said Nato was briefed on Vostok-2018 in May and would monitor it.

He said "all nations have the right to exercise their armed forces, but it is essential that this is done in a transparent and predictable manner".

"Vostok demonstrates Russia's focus on exercising large-scale conflict. It fits into a pattern we have seen over some time: a more assertive Russia, significantly increasing its defence budget and its military presence."

Why is Russia-Nato tension high?

It has been increasing since Russia intervened in Ukraine in 2014, backing pro-Russian separatist rebels.

Russia says the Nato build-up is unjustified and provocative. It says the Ukrainian revolution of 2013-2014 was a coup masterminded by the West.

Russian diplomats were expelled from Nato countries after the poisoning of Russian ex-spy Sergei Skripal and his daughter, Yulia, with a nerve agent in southern England in March. The UK blamed Russian military intelligence – the GRU – for the attack; Moscow denied involvement.