Russia: Putin sworn in for fourth term as President

Vladimir Putin has been sworn in for a fourth term as Russian president and pledged to harness the country's talents to "achieve breakthroughs".

Some 5,000 guests attended the lavish ceremony in an ornate Kremlin hall.

He has been in power for 18 years, as president and prime minister, and opponents have likened his tenure to the reign of a tsar, or emperor.

He then took a short ride in a new, Russian-made limousine, called Cortege, in the Kremlin compound. Previously he and his entourage have used foreign luxury cars.

In previous years a bigger motorcade drove the president across Moscow to the ceremony. 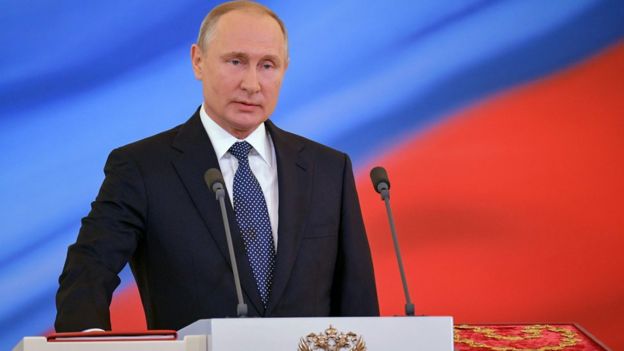 German ex-Chancellor Gerhard Schröder, now in charge of a branch of Russian gas giant Gazprom, was in the front row alongside Prime Minister Dmitry Medvedev and Orthodox Church Patriarch Kirill.

"We have revived pride in our fatherland," Mr Putin said. "As head of state I will do all I can to multiply the strength and prosperity of Russia."

"We need breakthroughs in all areas of life. I'm deeply convinced that such a leap forward can only be secured with a free society that accepts all that is new and advanced."

He said that in the past Russia had risen again from setbacks, "like a phoenix".

On Saturday riot police confronted protesters against his rule in Moscow and other Russian cities.

The biggest complaint among Russians surveyed by the Levada Centre, a major sociological research body, was that Mr Putin had failed to reduce the wealth gap (the top complaint for 45% of respondents).

Another big complaint (for 39%) was the failure to refund Russians who lost savings during market reforms.

Mr Putin's most praiseworthy achievement was restoring Russia's world status as a great power (47%), according to the poll. It was conducted last month among 1,600 Russians in 136 towns and cities.

Compared with a similar poll in 2015, there was a doubling of complaints that Mr Putin had failed to raise wages, pensions and benefits.

Why were there protests?

Nearly half of the reported 1,000 arrests on Saturday were in Moscow.

Mr Putin was re-elected president with more than 76% of the vote, his best ever election performance, but widespread irregularities were reported by some international observers. Allegations of ballot-rigging had dogged previous elections too.

The country's best-known opposition leader, Alexei Navalny, was barred from standing against Mr Putin, on grounds of a conviction for embezzlement which he denies and alleges was politically motivated.

Mr Navalny was arrested briefly as he tried to join Saturday's unauthorised protest rally in Moscow under the slogan "He's not our tsar".

Domestic opponents accuse Mr Putin of undermining democracy in Russia – a policy dubbed "managed democracy" – to keep genuine opposition parties out of parliament and ensure that he and his allies retain power indefinitely.

Could Putin just go on and on?

First elected president in 2000, Mr Putin renewed his four-year term in 2004 before stepping aside in 2008 to serve as prime minister under his protege, Dmitry Medvedev, because by law he could serve only two consecutive terms.

Few doubted who was really in charge and in 2012 Mr Putin returned as president, this time for a term of six years.

When he reaches the end of his fourth term in 2024, he will have been in power for nearly a quarter of a century.

That would still fall short of Soviet dictator Joseph Stalin's 31 years in power or, indeed, the reigns of some Russian tsars such as Alexander II (26 years) and Nicholas I (30 years). 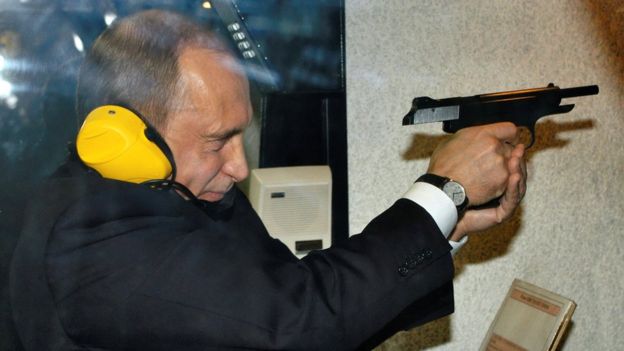 1990s: After serving as top aide to mayor of St Petersburg, enters Boris Yeltsin's Kremlin in 1997, where he is made chief of the FSB (the KGB's successor)

2008: Barred from running for a third consecutive term, stuns analysts by returning to post of prime minister while his protege Dmitry Medvedev becomes president

2012: Re-elected president and for term of six years, under new law