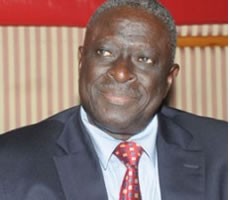 Chairman of the National Development Planning Commission P. V Obeng has touted Ghana's record in bridging the developmental Gap between the North and South of the Country.

His comments come in the wake of irregularities in the operations of SADA which was uncovered by  Joy News' Manasseh Azure-Awuni.

The Joy News investigation which was triggered by a damning Auditor General's report, showed instances of alleged misappropriation of public funds as well as breaches of procurement procedures.

Critics have called for key personnel of SADA to be investigated and prosecuted if found culpable.

But the Chairman of the NDPC believes the success of SADA is there for all to see.

"Has growth made a few richer; much richer than they would have been whilst the majority remained  poor.

Have we fulfilled our development obligations to various people regardless of their geographical locations in our individual countries?

"For-example in Ghana we recognised that the development gap between the South and North was increasing overtime even as we were registering higher growth.

"And it took our commitment to inclusivity and inequality for the president to drive us to look into ways of bridging this gap in an accelerated manner hence our adherence to the zonal development strategy out of which SADA was born.

"Ghana's records are there for all to see," he noted challenging participants to learn the institutional arrangements the political will and drive in these programmes.