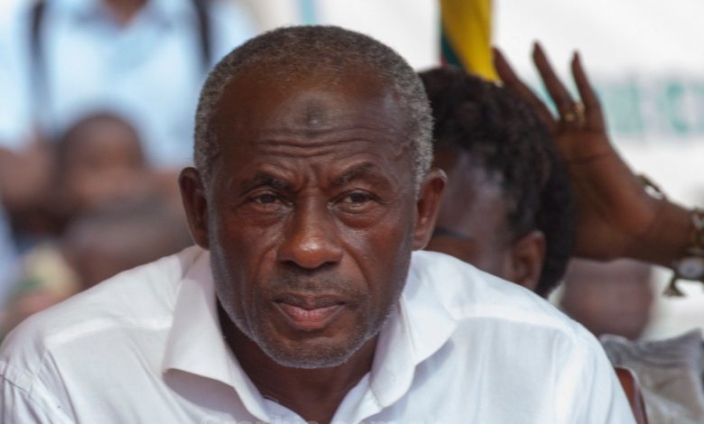 An Accra High Court has adjourned the trial of former Housing Minister, Collins Dauda in the case regarding the construction of the Saglemi housing units to October 21.

Andrew Clocanas, the executive chairman of Construtora OAS Ghana Limited, the company that executed the project, has been charged in court alongside former Ministers and Kwaku Agyeman-Mensah.

They are joined in court by former Chief Director of the Ministry Ziblim Yakubu and Tetteh Angelo, the majority shareholder of Ridge Management Solutions DWC-LLC.

They are facing a total of 52 charges including intentionally misapplying public property, willfully causing financial loss to the state and issuing false certificates.

The accused persons have since pleaded not guilty and have been granted bail.

The case was to take off on Wednesday, October 13, but that did not happen as administrative procedures required to move the case, which was filed at a court presided over by a Judge who sat during a vacation to another judge, are incomplete.

Read full details of case as filed by the AG below

“In August 2012, the then President, John Dramani Mahama, granted executive approval to the Ministry of Water Resources, Works and Housing (MWRWH) for the construction of 5000 affordable housing units (the Saglemi Affordable Housing Project) for sale to workers through mortgage arrangements provided by Ghana Home Loans to be implemented by Construtora OAS Limited.

The project was to be funded by a Buyer’s Credit of $200 million provided by Messrs Credit Suisse International (Credit Suisse). On 31st October 2012, Parliament granted approval for the government to secure a facility of $200mi1lion from Credit Suisse for the construction of 5000 affordable housing units by Messrs Construtora OAS Ghana Limited, following a joint memorandum to Parliament by the then Minister for MWRWH, Hon. Enoch Teye Mensah and the then Minister for Finance and Economic Planning, Dr Kwabena Duffour.

On 4th January 2013, a Facility Agreement was signed between the Ministry of Finance, as the borrower, and Credit Suisse, as creditor, for a facility of $200million for the construction of 5000 housing units. On the same day, MWRWH through the then Minister, E.T Mensah signed an Engineering, Procurement and Construction (EPC) Agreement with Construtora OAS Ghana Ltd represented by fourth accused for the construction of affordable housing units at Saglemi in the Greater-Accra Region.

The project which was to be executed in four phases on 2, 172 acres of land was at a contract price of US$ 200million, including consultancy services. An Escrow Management Agreement a condition precedent to the release of the facility to the borrower, was also signed pursuant to the Facility Agreement and the EPC Agreement, between the Ministry of Finance (Borrower), the MWRWH(Account holder), the Bank of Ghana(Account holding bank) and Construtora OAS (Contractor)]. The purpose of this agreement was to ensure that the $200million facility would be properly applied towards the development of the 5000 housing units. The agreement therefore required payments under the contract to be effected only when specific works had been duly executed, verified and certified by the consultants of the project, the Architectural and Engineering Services Ltd. (AESL). The EPC Agreement provided for an advance payment of 40% of the contract price to the contractor within five working days of the receipt of the facility in the Escrow Account.

On 9th January 2013, Credit Suisse disbursed an amount of $198,450,000, representing the $200million Jess fees and transaction expenses into the Escrow Account. On 27th February 2013, an amount of $80million representing 40% of the contract sum was transferred to Construtora OAS as advance payment.

The contractor however failed to apply the amount towards the purpose for which the payment was made. On 27th February 2014, the 1st accused who had assumed office as the new Minister for MWRWH, without any parliamentary approval, reviewed the original EPC and signed the First and Restated Agreement with Construtora represented by its Executive Chairman, the 4th accused. In the process, he changed the scope of Works and the application of the $200nullion approved by Parliament for the construction of 5000 housing units.

This new agreement required th e contractor to execute the project in three phases over a site of 1 272 acres whilst the $200 rnil1ion was now to be applied towards the execution of only the first phase of the project comprising just about 1502 housing Units. This was contrary to the executive and parliamentary approvals as well as the Facility and Escrow Management Agreements.

On 15th April 2013, the AESL signed a contract with Vito Hugo-Coordenacao e Gestao De Projectos (VHM) subcontracting their consultancy services under the EPC Agreement to the company for $500,000,000 over a period of 24months. This was the amount provided under the EPC Agreement for consultancy services for the construction of the 5000 housing units. Under the Agreement between AESL and VHM, a maximum amount of $2,000,000 was to be paid to AESL, whilst not more than $2,987, 750 was to be paid to VHMfor their services.

This contract also provided for 40% advance payment. In April 2015, whilst the AESLand the VHMwere still providing consultancy services under the contract, the MWRWH, entered into another contract for consultancy services with Ridge Management Solutions DWC-LLC (RMS), represented by its director and majority shareholder, the 5th accused, Nouvi Tettey Angelo, for a period of three months at a contract sum of $5.6million. This was at a time RMS was not registered in Ghana as a company. Once again, the MWRWHwas required to make an advance payment of 40% of the contract sum.

This contract was completely outside the EPC Agreement. Investigations revealed that the 5thaccused, who is the majority shareholder of RMSis also a Director of VHMGhana Ltd. ln August 2016, the 2nd accused entered into yet another consultancy agreement with RMS, this time for what was referred to as ‘marketing implementation services’ for a sum of $2,502,198.00. Once again, the Ministry was required to make an advance payment of 40% of the contract sum.

All this while the AESL and VHM were purportedly performing the same consultancy services for the project, their consultancy agreements having been extended at various times by the 2nd and 3rd accused persons. On 21st December 2016 , the 3rd accused, Alhaji Ziblim Yakubu without recourse to Parliament reviewed the First and Restated Agreement and signed the Second and Restated Agreement.

These payments were authorized and approved by the 1st and 3rd accused without any evidence of specific project milestones achieved by the contractor as required under the EPC Agreement. Further, there was no justification of the appropriate use of the advance payment of $80 million earlier made. Between June 2015 and January 2017, a further amount of $54,066, 768.16 was paid to the contractor of the project when no works had been duly executed. Once again, there were no milestone reports supporting the payments.

Nonetheless, the 2nd and 3rd accused persons ordered for the payments to be made. Further payments were also made to the three consultants; AESL, VHMand RMS, far in excess of the $5,000,000 stated as consultancy fees in the original EPCAgreement without any evidence of work they had done. There were no verification and certification of actual work done by the contractor as required under the EPC Agreement. Even though a total amount of $196,428,891.66 has been spent on the Saglemi Affordable Housing Project, with the contractor having been paid $179,904, 757.78, investigations revealed that the cost of works executed on the site, including consultancy services, is about $64,982,900.77. Only 651. 75 acres of land out of the 2, 172 acres of land made available by the MWRWH to the contractor for the project has been developed. Investigations further revealed that only 668 housing units were completed the contractor.

These houses are however not habitable under the project has been sold and the Facility remains unpaid, resulting in huge financial loss to the Republic of Ghana.”