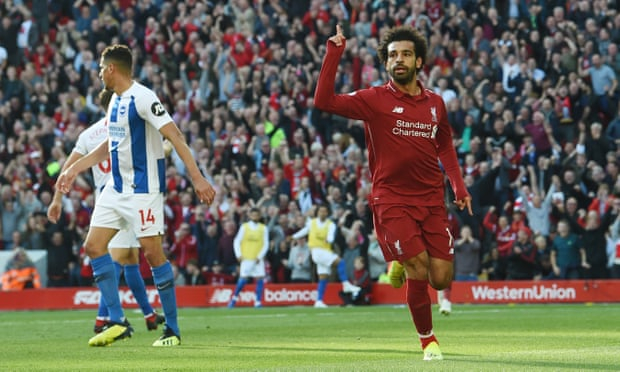 Mohamed Salah's first-half strike moved Liverpool top of the Premier League table with a 1-0 victory over a stubborn Brighton side.

Salah, who scored a record 38 goals in the Premier League last season, secured the three points with a clinical finish off the inside of the post.

Jurgen Klopp's side were not at their fluid best, with their most dangerous moments coming before Salah struck.

After Sadio Mane poked a shot just wide, Roberto Firmino drew a smart save out of Mat Ryan with a downward header before Trent Alexander-Arnold hit the bar with a free-kick.

Brighton claimed a stunning 3-2 win against Manchester United in their previous game but rarely threatened to follow that up with an upset at Anfield.

They did, however, give the hosts some nervous moments in the closing stages and were denied a point when Alisson saved superbly from Pascal Gross' header.

Liverpool are the only side to have taken maximum points from their three league games after reigning champions Manchester City dropped points at Wolves earlier on Saturday.

Chelsea and Watford also boast a 100% record but have played one game less than Liverpool.