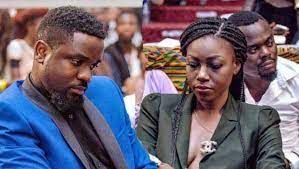 Her statement is premised on a claim that the rapper denied her a favour during a Twitter space.

According to her, she asked the rapper to do a freestyle during the session on Twitter, but the ‘oofeetsɔ’ hitmaker refused.

During an interview on her upcoming movie ‘Fifty-fifty,’ she revealed that the musician has promised to grace the occasion with his presence.

Actress Yvonne Nelson had this to say about Sarkodie… 😂😂😂😂😂😂 pic.twitter.com/1vX76WO3Fc

Speaking on whether the rapper would perform at the event, she stated that she couldn’t guarantee since the musician is stingy.

“Sarkodie is pεpεε [to wit Sarkodie is stingy], so I don’t think he would perform. So we told him to do a freestyle on the Twitter space, but he refused,” she said.

She made the remark on Asaase Radio.

A freestyle of a line in Sarkodie’s “You go kill me” by actor turned pastor, Majid Michelle followed her response.

The movie is premiering at the Silverbird Cinemas on May 21.