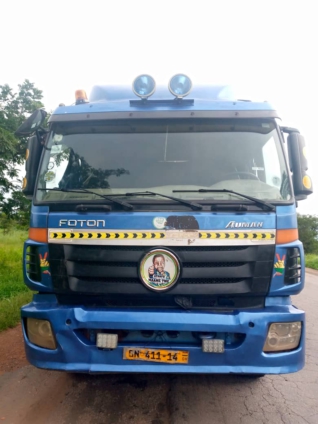 The Savelugu Police Command has impounded an articulator truck with registration No GN 411-11 loaded with banned rosewood on the Savelugu-Diare stretch of the Tamale-Bolgatanga highway near Diare.

According to the Police, the driver of the truck mentioned Marzuk Mohammed during interrogation as the owner of the illegal rosewood, adding that he tried to influence the Police.

The Police source added that the driver sensing he will be arrested, bolted leaving the truck behind.

The Police said the lumber was cut from the Yagaba Kubore District of the North East Region. The truck was heading for the port.

The Police source said one Marzuk Mohamed surfaced at about 2 o’clock claiming ownership of the rosewood. He was consequently arrested.

According to the source, this is the second time the suspect has been arrested, adding that in the first instance, he was prosecuted for the offence.

The case has been handed over to the Regional Command for further investigations. The suspect is currently on Police enquiry bail.

The Forestry Commission has been written to on the crime of transporting lumber without authority from the forestry officials.