Second IEA debate should be between NDC/NPP – Kofi Adams 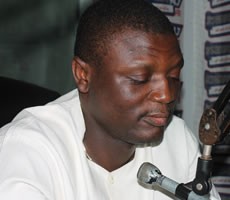 Kofi Adams, spokesperson of former President Jerry Rawlings is proposing that the second Institute of Economic Affairs (IEA) presidential debate, scheduled to be held November 20, be between candidates of the ruling National Democratic Congress (NDC) and the opposition New Patriotic Party (NPP).

According to him, since the two political parties are the front runners for the December 7 general elections, it will be expedient to field only candidates from the NDC and NPP to enable voters make an informed choice.

The IEA has been heavily criticized for the time allotted to the four presidential candidates who took part in the presidential debate held in Tamale Tuesday.

But speaking on Asempa FM’s Ekosii Sen programme Thursday, Kofi Adams said the second debate should be a face-off between President Mahama and Nana Akufo-Addo for an effective debate.

He described as a waste of time the fielding of four presidential candidates at the debate since none of them had ample time to elaborate on their policies to the electorate.

The former presidential aide added that it will be a miracle for another party to outwit NDC/NPP in December polls.

He was convinced President Mahama will be more than ready to take an advantage of the platform and make his polices and programmes known to Ghanaians.