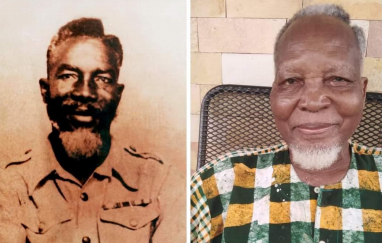 The last surviving son of Sergeant Frederick Cornelius Adjetey of the 28th February crossroads shooting incident fame, has joined his father in eternity.

Until his passing on July 27, 2021, the Late Rev. Stephen Okan-Adjetey was a retired Minister of the Presbyterian Church of Ghana.

His sad demise occurred at the Ridge Hospital in Accra after a short illness—only a few weeks after his eightieth birthday.

His sudden death has sparked scores of memorials across Christendom in Ghana as friends, church members, and the general Christian fraternity mourn and send their condolences to the bereaved family at their Pokuase residence and at La, his traditional home.

The moderator of the General Assembly of the Presbyterian Church of Ghana has also, since the incident, sent a delegation to commiserate with the family and to Minister to them.

Lost for words following her husband’s sudden departure, the widow, Evelyn Okan-Adjetey, a retired midwife of the Ministry of Health, stands firm and strong, consoling her children, with the words, “Daddy is only gone home to be with our heavenly Father, awaiting our certain reunion when the Lord Jesus returns to take us.”

Survived by six children, the Reverend’s open-hearted and open-home policy, made him the father of dozens of other “sons” and “daughters” to whom he was a spiritual father.

Ghana’s leading para-church Christian ministry, the Scripture Union, has described Rev. Okan-Adjetey as an icon of the ministry in the northern region, where he resided in Tamale and served the Union in several capacities.

Until his demise, Rev. Stephen – Okan Adjetey was the point of reference for the media and other entities in relation to his father, Sgt. Cornelius Frederick Adjetey, who, together with Cpl. Attipoe and Private Odartey Lamptey, lost their lives in the February 28, 1948 crossroads shooting incident.

Every year, Ghana recalls the fragile moments of 1948 when Accra erupted in riots on account of
the three World War 2 veterans who were shot by British colonial police.

They were on a peaceful march to demand compensation for their services during the war, and the sad incident became one of the key elements that propelled the country towards independence.

Compelled by a rare sense of divine forgiveness, Rev. Okan – Adjetey and some members of his family once travelled to the UK in an attempt to reunite with the then British Police Superintendent Imray, who shot his father and the two other leaders of the demonstration, in order to forgive him!

Granting a series of interviews to the media during every commemoration of this event, Rev. Okan Adjetey became a known face representing his famous father. During these interviews, he always advocated for the proper and tangible recognition of his father and the two fallen veteran heroes. The obvious question is: will his passing silence the voice of the advocate?

Maybe not, for Rev. Stephen Okan-Adjetey, in what may seem as a prophetic move, named one of his sons after his father. Therefore, grandson Cornelius Okan-Adjetey may well continue where his father left off.

Also adorning the living room of the Adjeteys’ family house is the striking picture of veteran Sergeant Adjetey, which is a fitting reminder of the legacy of the Adjetey family’s contribution to Ghana’s history independence.