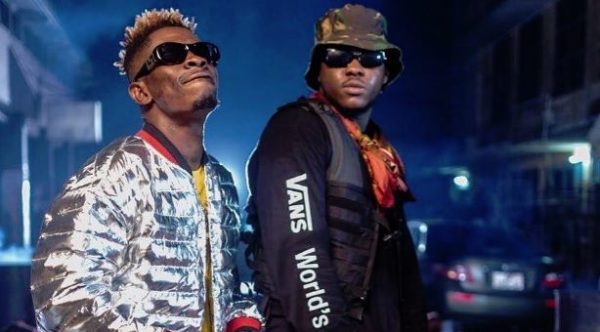 Reggae and Dancehall act, Charles Nii Armah Mensah, better known in showbiz as Shatta Wale, has idolised Medikal with a tattoo on his arm.

The act, which has since received distinct social media reactions, has been described by many as extreme love demonstrated by the Shatta Movement boss towards his ‘colleague-turned-friend’.

In a tweet, Medikal reciprocated the love “Words can’t explain how I feel about this! Shatta Wale love you die, King, Deeper than blood.”

Words can’t explain how I feel about this ! @shattawalegh love you die King, Deeper than blood ❤️ pic.twitter.com/AHvvWJsu92

It is unknown what could have triggered the action by Shatta Wale, but the ‘Taking Over’ hitmaker is heard in the video saying he is about painting the town with his new tattoo even as he hailed Medikal.

For many entertainment lovers, this development shows that the relationship between the duo is bigger than people actually think of.

Other musicians like Kelvyn Boy and Medikal have equally tattooed at least a colleague’s name on their arms.

Meanwhile, Hi-Hop musician, Joey B, has however jabbed Medikal for being ungrateful. He claims that after he [Joey B] tattooed Medikal’s name, the musician did not post it as he has done for Shatta Wale’s own.

Joey B wrote: “As I tatt your name dier you no post smh bet.”

as i tatt your name dier you no post smh bet.