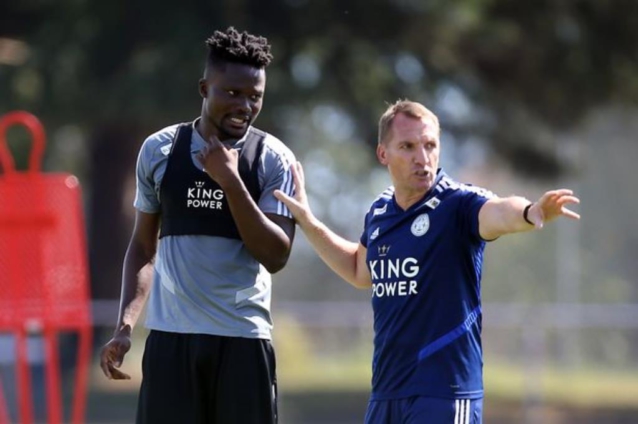 On October 18, 2016, head coach of Danish side FC Copenhagen, Ståle Solbakken made a bold prediction about Ghanaian defender Daniel Amartey. He said, “In two or three years time, Leicester will be on their knees praying that he (Amartey) signs a new contract”.

Four years on and Amartey is clearly not in the plans of the former Premier League champions. This sums up the predicament of the highly-rated defender.

The centre back played under Solbakken in Denmark for two years. From 2014 to 2016, scoring six goals in 49 matches.

If the aforementioned comment of the coach, who has won the Danish league eight times, is anything to go by, then Amartey was a huge prospect then and was expected to build on that but unfortunately, the dream is gradually falling apart.

He is yet to feature for the Foxes since breaking his ankle in a league match against West Ham in October 2018.

NEW on Myjoyonline now 🇬🇭: Daniel Amartey is one of the lowest earners at @lcfc, who play Crystal Palace on Saturday. Time for the Ghanaian to fox off? 🦊 #JoySports #football #JoyNews #EPL #lcfcfamily #Foxes #epl

Irrespective of the lengthy injury layoff, the club have shown little faith. They currently have no plans to make him a crucial member of the squad and maybe it is time for Amartey to look elsewhere.

Amartey not a regular at King Power Stadium

Amartey has struggled to stake a claim for regular starting berth since joining the Foxes. In three seasons, he has managed 61 appearances in all competitions.

His most productive season was in 2016/17 season when he played 35 games under the guidance of two trainers Claudio Ranieri, who signed him from Copenhagen, and then Craig Shakespeare.

The 35 appearances included Champions League clashes against Atletico Madrid, Sevilla and FC Porto. He was used predominantly as a defensive midfielder with the club struggling to find an ideal replacement for N’Golo Kante.

He barely was given the opportunity to operate in his natural position as a centre-back with the arrival of Nigerian midfielder Wilfred Ndidi in 2017 forcing him to the bench.

Amartey not getting any younger

At age 25, Daniel Amartey has at most 8-9 years of competitive football remaining before he considers hanging his boots. On the flip side, his age is considered matured in football terms which means there would be suitors with good personal terms.

In recent years, clubs have gone in for players bearing in mind two things – quality and longevity. Amartey fits that category precisely well. He is a player with brawn and brain.

Again, before it is too late age-wise, the versatile player can take a cue from Black Stars captain Andre Dede Ayew.

Swansea re-signed Ayew from West Ham for a club-record fee of £18m after enduring a torrid spell in London. He left the Swans in 2016 with West Ham paying £20m for him after scoring 15 goals in his debut Premier League season.

After a disappointing loan spell in Turkey last season, the 30-year-old has currently reasserted himself and is now the talisman of the Welsh club with 13 goals and 6 assists. Amartey can follow suit to relaunch his career which is more or less in jeopardy.

National team call up at stake

Lionel Messi is arguably the greatest player of all time but one blemish in his fabled career is his inability to win a trophy with Argentina which gives his detractors the chance to harp on that.

By and large, every footballer’s dream is to represent his country in major tournaments and win trophies and Amartey is no different.

Amartey made his Black Stars debut at the 2015 Africa Cup of Nations tournament and enjoyed a fantastic tournament in the team reached the final. He made it to the 2017 tournament too, however, since then he has been irregular.

His absence since 2018 has paved the way for Joseph Aidoo and Kassim Nuhu to become first choice options in the team. Also, Spain-based defender Mohammed Salisu is working hard and would not be long before he gets the deserved invitation.

These three plus the experienced duo of Jonathan Mensah and John Boye means Amartey has a lot of work to do to convince coach Charles Akonnor.

DISCLAIMER: The Views, Comments, Opinions, Contributions and Statements made by Readers and Contributors on this platform do not necessarily represent the views or policy of Multimedia Group Limited.
Tags:
Daniel Amartey
Leicester City
Premier League