Should NPP really ‘de-akanise’ to save its existence? 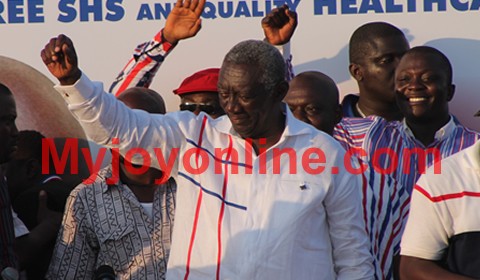 The recent charges by Dr. Nyaho Nyaho-Tamakloe, Yaw Boateng Gyan and earlier by Lawyer Ayikoi Otoo that the NPP is an Akan party and that non-Akans do not feel very much at home in the Party has re-ignited the long standing debate as to whether NPP is indeed an Akan or a non-Akan party.

Some of these propaganda have been narrowed further to the age old perception that the Party is also riddled with an Ashante and Akim rivalry, a topic which I will attend to in my next treatise.

However let me deal with the Akanisation issue for now. We can simplistically say that de-akanising the NPP means choosing a non-akan Flagbearer or northernising the Party more and stabilizing it in the Ga lands or making in-roads into the Southern Volta lands. Beautiful and eulogic but do we really think the NPP’s woes are simply based on whether it is Akan or Non-Akan? Again, what is the ethnic composition of Ghana, and who are non-Akans or Akans in Ghana?

The Non-Akan areas in Ghana are the three northern regions, southern parts of Volta Region, Ga, including Dangme and some very small non-akan enclaves in largely Akan areas.

Demographically, the people called Akans are found from the upper reaches of the Volta Region, through the Oti and Afram Plains, across Brong Ahafo Region, through Ashanti, Eastern (excluding the Dangme parts), Central and Western Regions of Ghana. The Bawules and Nzemas may be contestable as Akans but I call them Akans because on the other side of the border in Ivory Coast their counterparts there, the Aowins, are considered Akans.

Used very loosely therefore, the people of Akan extraction live in the forest regions of modern day Ghana and constitute about 70% of Ghana’s population. Thus, a party, which could be, truly tagged Akan could by right be the dominant party to rule in Ghana, but if you look at the parties that have ruled Ghana they have never been truly classified as Akan based.

The CPP, PP, PNP, NDC and NPP have all ruled Ghana at some point. Can we describe all these parties as Akan based, having swept to power with large Akan votes? Somehow, some people in the NPP seem to admit and concede among themselves that the NPP and its predecessor PP are Akan based parties. Could the charge be unfair? Could it also be that it is a charge based on perception rather than empirical facts?

The NPP has won majorities in Greater Accra (non-akan lands) and given the NDC a good run for its money in the three northern regions (non-akan lands) before. These instances suggest to me that they can and generally do well in non–akan lands. I have not included Volta Region because the best the NPP have ever done there is to get one seat, but during the 1969 election that saw the Progress Party in government, the party won in both Akan and non-Akan lands.

If we look at the voting patterns in Ghana we can see that even though the NDC may gain over 80% of votes in the non-akan areas it still takes 40% share of the votes in the Akan areas. In Ashanti Region in 2008, the NDC took 25% share of the votes and maintained that in 2012. The NDC swept Central Region, which is an Akan land to secure the 50+ % to win the last general elections. Is this voting pattern tribal? I beg to differ. When NPP won in 2000 they did so by appealing across the entire nation, Akan or non-Akan lands.

Without seeking to defend the NPP’s choice of their three flagbearers which I put down to accidents of history, the party has carefully balanced this with a Northern Muslim partners as running mates. The North-South ticket is not an accident of history but a contrivance to ensure a truly national ticket. It has also chosen party chairmen from non-Akan lands to create an ethnic balance.

The question though is this; do people vote for NPP because of the personalities involved or the message they carry? In Ghana people who vote for parties do so for different reasons. As I see, and I stand to be challenged on this, people who vote NPP do not vote on tribal lines but vote for aspirational reasons based on the party’s credo of Liberal Democracy and history.

They simply see the NPP as capable of carrying their aspirations forward. The NDC, on the contrary, have managed to convince those who vote for them that the NPP aspirations have no room for all and therefore they as Social Democrats make room for those who cannot get on board the NPP’s aspirational credo. You see in an “Animal Farm” style of politics, the leaders of NDC believe in and practise the NPP aspirational politics but use socialist rhetoric to gain their following.

What NPP must continue to do in government therefore is what both Professor Busia and later President Kufuor started, which was the redistribution of wealth through rural development and the numerous social programmes their governments introduced. However, many of us did not understand that these social programmes aimed at distributive justice leading to social inclusion.

This agenda ranged from education to social policies and programmes that aimed to enhance social justice and equality. The basis of such a programme comes from the principle that it is the primary and principal responsibility of government in a just society to determine the distribution of the extensive system of rights, duties and liberties to majority of its citizens as well as the division of the advantages from these systems.

This principle therefore establishes that if the government, having been put into power through social cooperation, does not ensure a fair distributive aspect of the basic fundamental rights and liberties of society to majority of its citizens who are rural based as in the case of Ghana, then it is not implementing social justice.

Thus, rural infrastructural development and social intervention programmes like NYEP, School Feeding, FCUBE, Metro buses, Micro financing, NHIS and LEAP were all part of the array of programmes intended to equalize opportunities for all, and redistributing wealth for all including, and mostly, those who did not share the aspirational values of the NPP. Social interventionist programmes do not carry party colours and they are no respecters of Akan or non-Akan.