Should pregnant women eat for two? 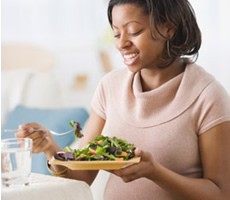 Anyone who’s been pregnant will tell you how friends or family members regularly push food towards them, saying: “Go on! Help yourself! You’re eating for two now!” Women who have spent their life worrying about their weight often find themselves thrilled or relieved that at last there’s a good reason not to worry about what they eat. For once, they argue, it’s allowed… and surely it’s good for the baby if you eat plenty?

Unfortunately when you begin to look at the evidence, this doesn’t appear to be the case.

The belief that eating for two is a good idea results in up to a third of women putting on amounts of weight medically considered to be excessive. Not only is this weight hard to lose after the baby’s born, but it can lead to more serious consequences.

There is an increased risk of high blood pressure, pre-eclampsia and gestational diabetes. It can also affect the birth itself with a higher rate of interventions, including caesarian sections and even an increased, though still rare, risk of stillbirth.

Professor Jane Ogden, a health psychologist at Surrey University has found that some women feel that pregnancy legitimises the amount they want to eat. If so, there is a danger that becoming accustomed to eating for two can make it hard to return to eating for one after childbirth, or later if you’re breastfeeding.

Getting people to take notice of any guidelines is another matter. A lot of women say they feel perpetually ravenous while they’re pregnant, so it’s not surprising that they eat more.

The American Dietetic Association’s review of interventions to help women avoid excessive weight gain during pregnancy found that some worked and others didn’t. In Finland, women ate more fresh fruit and vegetables as a result of the advice, but didn’t put on less weight. In the US some interventions did work, except when women were obese before they became pregnant.

Other studies in Native American Cree communities in Canada found that nutritional advice had only a modest effect. And a recent review of different interventions found those that encouraged women to eat a healthy diet were more effective in terms of maternal weight and obstetric outcomes than those recommending walking and other types of light exercise.

What if someone’s eating for three or even four because they’re expecting twins or triplets? Do they need to eat significantly more? Perhaps not.

If a woman is carrying more than one foetus her metabolic rate is 10% greater, causing her to use up calories faster. And some diets recommend women expecting twins or triplets eat up to 4,000 calories a day. That’s as much as the British forces are advised to consume on duty in Afghanistan, but this doesn’t take into account that pregnant women are likely to be slightly more sedentary than fighting soldiers.

What’s also true is that women expecting twins or triplets who don’t put on enough weight are more likely to have very small babies. But although women are sometimes told to eat a great deal of extra calories, it’s not clear where the evidence for exactly how many comes from.

So putting aside the question of the multiple births, how much extra should people try to eat when they’re pregnant?

In the US, the Institute of Medicine recommends that pregnant women eat three meals and two snacks a day. That sounds like plenty until you look at the number of calories recommended: an extra 340 calories a day during the second trimester and 452 calories a day in the third.

That is the equivalent of a normal diet plus two eggs during the middle months of pregnancy and two chocolate digestives plus some garlic bread in the third. It’s hardly eating for two. As the London obstetrician Patrick O’Brien puts it, “You’re eating for one and a bit.

That is the equivalent of a normal diet plus two eggs during the middle months of pregnancy and two chocolate digestives plus some garlic bread in the third. It’s hardly eating for two. As the London obstetrician Patrick O’Brien puts it, “You’re eating for one and a bit.